I know I have been bad. The Christmas dinner and the cookie brigade has consumed me for the last 4-5 days.

Mom’s dinner was nice. We had turkey and ham with the usual side dishes. The diabetic cherry cookies were a hit. Mom is no rationing them off to Joe to ensure he doesn’t eat the entire box in one sitting. I made Nigella’s Clementine Cake for dessert but everyone was too full to eat it. I had the next day with coffee and it reminded me of my Grandfather. Grandpa loved orange marmalade and that is exactly how it tasted. In short, if you don’t like syrupy like cakes, don’t try this one. Next time I think I’ll add a few ingredients to tweak it. 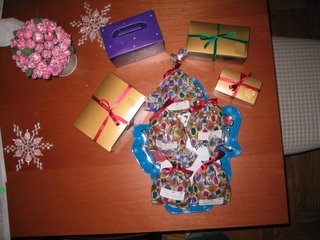 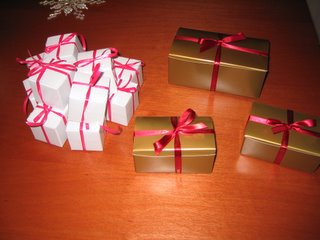 I finished the cookies and truffles for my mail out. The postman is picking up the packages today to deliver. I’ve also finished the packages for my office and our building and have delivered most of them. Now, I just have to finish boxes for Lrudlrick’s office, Narda’s and Lrudlrick’s. Yes, Lrudlrick gets his very own with extra walnuts and cherries.

Oooh! Santa Claus arrived early this year! Santa’s helper, Lrudlrick, delivered 4 brand new silpats and a granite counter butcher block to me. He said that I had been so busy in the kitchen for the last 5 days I started looking like a Keebler elf. He hoped an early Christmas present or two would help me. I’ve never had a butcher block before. It’s really cute and fits in the nook by the sink. Thank you, my Elf. I can’t wait to roll out biscuits on this baby.

The silpats are a godsend. I don’t think they founding fathers used as many parchment sheets as I have the last few days. I didn’t spend that much time in the kitchen baking the last few years and I made more varieties back then. I think I miscalculated the idle time needed to rehydrate the cherries, chill the dough, set the ganache and set the chocolate dip. So even though the cookies and truffles are rather simple to make, it takes twice as long to make a batch because I need to let it rest between steps.

Did anyone see Family Guy Sunday night? I can’t believe they used The Pinball Song. Amanda saw it too. I had to pause it at each frame to see Stewie’s contorted body. Too funny.

I hope the rumors about AD are true. Last night’s episode had me cracking up. I loved the ‘Curb’ reference. Ok, I’ll admit it. I watched the Sound of Music the other night. Lrudlrick passed out during Sound.

I hadn’t watched Sound in years. The Sound of Music was played every year at my grammar school. For a quarter, we each got to watch it played from the school projector. We all sat in the school gymnasium and watched as the nuns fiddled with the numerous reels that made up the 3 hour movie. Chrissy and I would sneak in an origami fortune teller and ask it silly questions like, “Is Scott smelly?” Scott by the way, was my first crush. He also was my first heart break. He was the only boy who didn’t show up to my birthday party.

There I was packaging my truffles and cookies humming and singing the songs in The Sound of Music. Somehow, my brain remembered most of the songs. Lrudlrick would wake up every now and then and ask if the Nazis landed yet and then pass out. He’s never seen it in its entirety. How you can go through parochial school and not see The Sound of Music is beyond me.

The Sound reminded me of nights with my brother watching old RKO films. My brother and I would hide out in my bedroom with a giant bowl of popcorn and watch these flicks over and over again. Once my mother caught me trying to mimic Cyd Charisse in The Band Wagon. Let’s just say cackling laughter from your own mother doesn’t bolster self esteem.

I suppose there is a resurgence of musical movies but I think were more cynical now and these feel good, life ends well movies don’t always hit with the audience. The next Broadway show which really was a fine movie to come out is The Producers. I’ve heard mixed reviews. Honestly, I was apprehensive when I heard Mel Brooks was trying to convert it into a Broadway show. Still, I went not once but three times and loved each time. Maybe the film will be a hit. I still wish Lawrence St. Dubois was a character in the new rendition but I suppose the laughs would be lost.

This Christmas our movie line up will be King Kong, The Ringer and The Producers. What are you going to watch?
Email ThisBlogThis!Share to TwitterShare to FacebookShare to Pinterest