"Gonzo is so dumb - I told him there was a water shortage and he suggested we dilute it! Ahhhhh!" -- Fozzie Bear 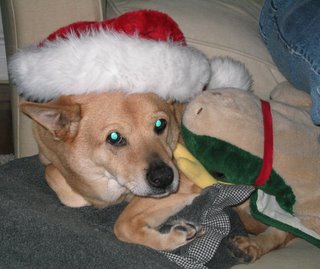 P-man annoyed we awoke him to take a picture

Just when I think being a mother to someone would be nice something comes along that changes my view.

My SIL has hit that wonderful pre-hormone stage called pre-teen angst. Add to this a heaping helping of "I'm the only child and you will pay attention to me" and we had a blow up that lead for a scene like no other.

Apparently, she still is learning how to displace her anxiety. She hasn’t quite figured out what to do yet so instead of releasing it in a constructive way, she overreacts, snaps at others and reverts to crying. Hey, that sounds like what I do.

Her anxiety was the request from her father to play the piano for her grandparents. My SIL is extremely reluctant to play piano for relatives. She’ll happily play for strangers but for family, she refuses. Well, this year, she was told by her father that if anything, she should play for her grandparents. When they arrived, she began snapping at everyone. When we asked to see her Christmas gifts, she’d respond, “They’re right there under the tree. You can see them yourself.”

As we were asking her mother how her ankle was doing she slipped at work in November and sprained it, we hear an earth shattering scream from the home office. Apparently, she hit her ankle on the side of the desk as she was swiveling around on her dad’s chair. That’s when the tears started and the shrieking. The tears were understandable. My toes and fingers are attracted to table legs and door hinges so I can empathize. The shrieking, though, was totally unnecessary.

Immediately, the grandmother and mother ran to see what happened. The screams and heaving were just what we needed to liven up our usually mundane visits to Staten Island. Lrudlrick ran over to see what happened. My FIL, my SIL’s grandfather and I stayed at the dining room watching the scene.

Lrudlrick began rationalizing with his sister.

L: Let’s take a look.
SiL: It hurts! Iiiiiiiiiii hit it on thhhhhhhheeeeee table!
L:Yes, I heard. Can you move it?
SiL: Yess!!!!! But it hurts! Iiiiiiii hit it on the desk!
L:Yes. Yes. I understand. Well, you can move it and it’s not swollen so it’s not broken. It just stings a little because you hit the bone. It will be ok.
SiL: Nooooo it won’t!
L:I’ve broken my wrist bone twice. Yes it will.
SiL: But it’s about me! I’m hurt!

That’s when Lrudlrick laughed and let the women fawn over her. A half hour of crying and whining later, she hobbled out of the office and we left for home. Sadly, we didn’t get any photos with her this year. 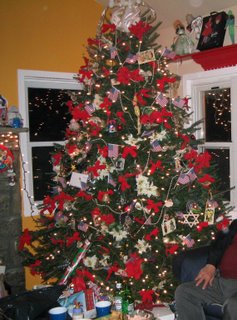 On the other front and the homefront, Christmas brought much cheer and Santa was very nice to me. Laile played Christmas songs on her new electric guitar. Matthew discovered Soy Milk is no substitute for Yoo-hoo and Lrudlrick discovered cinammon toothpicks rock.

Kris Kringle was extended to the kids so each kid bought someone a present. Thank you James for the Season One DVD of Scrubs. I can't wait to crack it open. I also received my much coveted sauté pan! Thank you Santa! 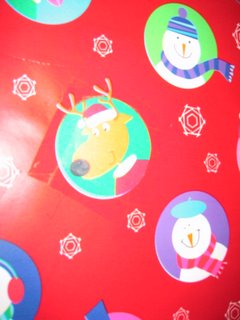 Lrudlrick saves a tear in his wrapping

My brother came over with Gentlemen’s Jack and Season One of The Muppet Show. After a delicious rib roast and lobster pasta, we settled down for a long overdue rest and watched Rita Moreno and Animal duel it out. I still don't know what Scooter is supposed to be and I think Piggy is a bit too much but I still love Pigs in Space.
Email ThisBlogThis!Share to TwitterShare to FacebookShare to Pinterest