Giraffe in the City

I've got my pillow fortress in full force now.  Everywhere I go in my home I have my pillows I use to build my little pregnancy belly comfort zone.
I feel like Linus and his security blanket.
Speaking of security blanket, my daughter's lovey spent his first night outdoors alone.  Giraffe in the Big City.  I'm thinking of writing a kid's book about it.
On Monday night we searched high and low for her lovey to no avail.
PG: Honey, where was the lsat place you remember seeing Jay Raffe?
TG: Picnic.
PG: Honey, I don't recall you having Jay Raffe at the picnic.
TG: I pee peed in the potty in M5.  Jay Raffe pee pee too.
PG: Is Jay Raffe in the M5 (our car)?
TG: Yes.
DH: {murmurs}I'm certain I brought him up after I parked the car.
He bee lines to the car facing the treacherous skunk gangs that have taken over our park filled neighborhood.
PG: Honey, if Jay Raffe is in the M5, we may have to wait until the morning to get him.  Would that be ok?
I'm hoping to buy us some time just in case he doesn't find him.
Now, I need to say honestly, we have backup loveys.  2 in fact.  However, kids have a sixth sense for their loveys and no matter how many times you turn them over and rotate them, they sort of start catching on.  TG isn't there yet but I also knew that if I whipped out backup #2 at this point, a full inspection would be in play.
TG: Oh, ok.
And like that she fell asleep for the first time without her lovey.
DH returned with an ixnay on the raffejay.
I pulled out he back up and when she woke up in the middle of the night to pee, she asked for her lovey.
I handed her backup #2 and she said, "Thank you Daddy for getting Jay Raffe from M5."  With that she hugged her lovey and passed out again.
That alone was a big milestone but then something awesome happened.
The next morning, DH took our dog out for her morning pee.
He texted me immediately.
DH: Look what I found. 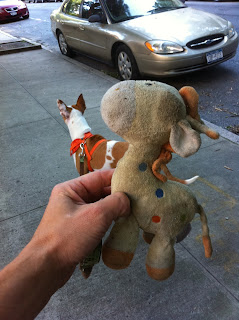 Apparently, Jay Raffe fell out of my husband's bag as he was carrying everything home.  A kind person must have recognized this as a toddler's special toy and placed it on the hood of a car that was directly in front of our building.  He appeared to have suffered some treading but nothing a good soak in the laundry wouldn't take out.
I'm not sure who was happier with all the events, TG in the middle of the night receiving backup #2 or DH finding #1 on the street in front of our building.
Who knows what Jay Raffe encountered in the night.  Maybe he met a pack of skunks.  Maybe he endured blistering winds.  Maybe a near run in with a pooch that needed to relieve him/herself.
We're glad he's back though.
Email ThisBlogThis!Share to TwitterShare to FacebookShare to Pinterest