Obviously DH kind of felt some of my emptiness because today, after work, DH picked me up and the family went to the local shelter and adopted a new four legged family member.
I'll be honest, even though I missed Zoe and felt her presence in the house, I was a bit relieved that I could focus on DH and TG for a bit. I didn't have to worry about not only going home in time for a decent nap or bedtime for TG but also getting home in time for a nice walk for the dog.
I wouldn't have to worry about late night walks, snowy walks, rainy walks. I wouldn't have to juggle making sure I fed DH, TG and the dog.
But DH really wanted a dog and the look in his eyes when he said he wanted one turned him into an 8 year old boy.
When DH texted me that he wanted to pick me up and included a video of our daughter saying, "I want a puppy." I immediately knew my husband's mind was set.
So off I went and put some feelers out at our local rescue groups.
The only pets I found that were young child friendly at the rescue groups on short notice were over 6 years old.
Normally, I would have no problem with this but after having to say goodbye and watch our elderly dogs deteriorate in the past two years, I'm a bit beat and cannot deal with another heart wrenching goodbye.
We went to the shelter and TG had a lot of fun looking at the doggies. She was only apprehensive if one became too rambunctious or one was barking loudly.
We went through at least three passes and tried to spend time with at least 5-6 dogs but the fit wasn't right. Too loud. Too rambunctious. Too nervous. Too ill. It's one thing when it's just DH and myself but we now have to find a fit for our young toddler.
TG seemed to be keen on Rex but when we brought Rex out, all he did was pounce repeatedly on TG. We all liked Mattie but the shelter staff said that the vet recommended a family with children 12 and older only. The hardest part was having to say sorry and watching the pooch go back into his/her kennel.
We were going to head home and contact the rescues on Monday.
TG asked to see the kitty cats and cows so we decided to go see the cats.
Apparently they keep the cats and puppies together. That's when we spied a quiet big eyed puppy, white with light brown spots. She kept just staring at us and was gently trying to sniff us. She was quiet and just kept gently pawing at us to get our attention. Her cage was the last on the floor and she was so tiny, you wouldn't notice her unless you squatted down.
DH asked to hold her and he brought her over to TG. TG hid but this little pup just gently sniffed her and licked her hand.
I think we were all smitten.
DH and I had a talk. We were hoping to help an adult shelter animal. We weren't expecting to take home a puppy.
"We are full with toddler to dos. Can we handle a puppy and toddler?"
DH reminded me of what I said on the drive over, "We should use God's gifts to help everyone big and small and if God wants us to take another four legged friend into our family, we should."
I proudly introduce to you, Tasha. 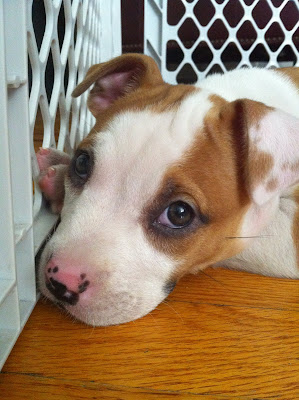