Wish I had a carpenter in my family 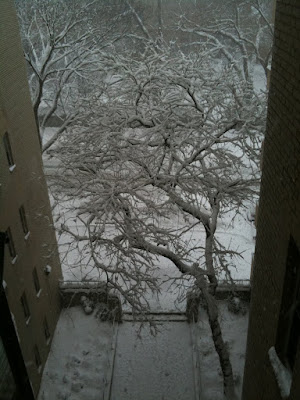 A blizzard hit NYC. Schools were closed and for the most part folks stayed home. DH took TG to the natural history museum again and I worked from home.
TG isn't a big fan of the snow. She loves the outdoor but mostly when during the spring, summer and fall. I don't think she knows what to make of snow. DH made a snowball for her again. She was disinterested. He then showed her she could eat clean white snow. Again, she wasn't interested and began her Woody Allen no rant.
TG has started what folks commonly call the 'Terrible Twos'. This is the stage in which toddlers start to test their boundaries and explore independence or so the books tell me. What's maddening for me is that she clearly knows she's not supposed to do whatever it is she is doing and will wait until DH or I are present to do so. She'll even wait until she received eye contact and then smile and proceed doing what she should be doing. Clearly, she could care less about the actual action but much rather wants to see the reaction.
I knew this day was coming but I'm still at a loss on if I'm responding correctly. If it's something that isn't dangerous and mainly annoying (ie. banging a toy on the floor) I state we don't bang the toy but roll it/push it/pull it/etc... and demonstrate. If she continues, I ask her to show me how to roll it/push it/etc. If she continues banging it, I tell her again we don't do so and that I will take it away if she continues. If she continues, I take it away. She doesn't protest usually. She just goes about with another toy. That's what's nutty. I know she could care less but she just wants to see the reaction.
If it's something I think she's doing to just get a rise out of me or attention of some sort, I either ignore it or distract her by calling her to me to help me with something. Most of the time this works but sometimes, I go back to 'We don't ... We ..."
The hardest thing for me to deal with at this point is the knowledge that she wants to climb things, especially when I'm in the kitchen preparing a meal/snack. It's as if she knows I'm indisposed. Clearly in her mind she's not waiting for me to be unavailable but that I just so happen to be unavailable.
There is only so much I can really do to distract her and keep her entertained while I'm chopping up onions.
It gets super hard when she starts whining for me to pick her up. She clings to my legs and pulls my pants nearly off and incessantly states, "Down? Down? Down?" She transposes up and down when it comes to requesting a pick up. DH thinks it's her asking us to get down so she can get up.
Sometimes she's just curious to see what I'm doing. Other times, she just wants me to hold her in my arms. There are somethings in the kitchen I can do one handed while holding a child. I've made scrambled eggs one handed. I've made pasta one handed. But there are other things like handle raw meats and cutting that can't be done one handed.
I'm still hunting for an affordable step stool that I can feel comfortable with TG standing on in the kitchen. We have one in the bathroom but it's a smaller variety and I don't let her stand on it without me behind her. In the kitchen I need to be able to move around. 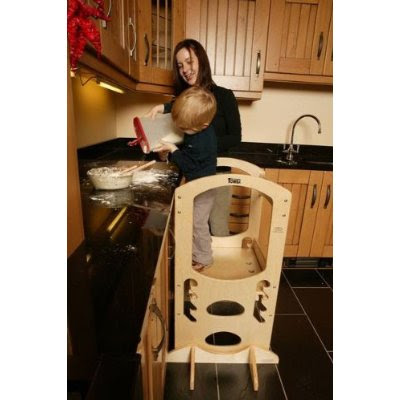 There is this one that I always see in my Google searches but it's awfully big and ugly and super expensive. If I told my husband I spent over $100 on a step stool, he'd have my head examined. I'm hunting for an alternative or a sale on this bad boy. I have a daughter who is super curious about cooking and I envision we'll need something like this for years to come.
Email ThisBlogThis!Share to TwitterShare to FacebookShare to Pinterest