Dreamt about the Statue of Liberty 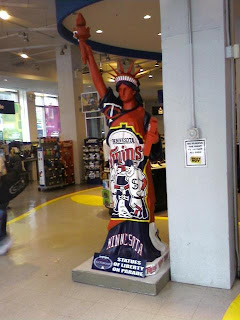 I think I was the Statue of Liberty. She was lying on a bed. French and American sculptors in white labcoats were discussing the best approach to renovate Lady Liberty. The French seemed intent on concentrating on the bottom half, near the billowing skirt of Ms. Liberty. When I and the Americans looked down, they saw the French added 4-5 beautiful faces etched onto my skirt near my crotch. Where my crotch was a giant empty hole they were trying to figure out what to do with. They sort of liked the emptiness but it also made it seem half completed.

I woke up late for my doctor’s appointment. Funny thing is on the morning news, “This Day in NY History” I learned the Statue of Liberty was reopened after refurbishment in 1986. Guess my brain knew something was up.
Email ThisBlogThis!Share to TwitterShare to FacebookShare to Pinterest