Got home by myself with BG. She didn’t stop eating. I didn’t mind the boob latching but the tube feeding complicates things.

I pump my breasts because I’m not sure how much I’m able to give her every feeding. I need to put that in the feed tube and then add formula to reach the recommended 2-3 oz/feeding for BG. I then need to tape the tube to my boob, initiate the bottle and get her to latch.

I’d make my life and my husband’s life easier if I just said, I’ll express and dump it in a bottle. We’ll see. Today on the way to the pediatricians, I felt bad BG was missing a feeding so I gave her a bottle. She hated it. The flow was too fast and the nipple didn’t fit right in her mouth. I guess that made me feel better. I immediately gave her the feed tube through my finger and she calmed down.

The pediatrician said she gained weight since her weigh in with the lactation consultant. She wants us to come again on Tuesday. She wants to see she’s growing in weight. She also told me that if I decide not to continue BF’g, I’m not less of a mom.

Hubby was with me at this visit. I was grateful. He asked some insightful questions. He won’t be able to make the next session so it will be my first full trip by myself with BG.

Hubby woke up this morning just as I was putting BG down in the bassinet. He stood there and just hugged me for a very long time. He kissed me gently and made me feel what I hope my BG feels when I cradle her. I so needed it.

He later told me that he gives me credit and any woman who decides to BF. He didn’t know it would be this hard and this demanding. He said he’d probably would have given up already and just switched to formula. He’s not pressuring me because he knows this means a lot to me.

I have no problem expressing it and giving it to her via a bottle if I have to. I’m not completely obsessed over breast latching. I just want to give her the benefits I read about. Of course, now, I think I’m doing a bit better with the latching. The first two feedings of the day took 40 minutes to an hour unlike the usual 1.5 hours. However if I don’t catch her hunger queues early and if I don’t have everything prepped and ready to go, it can get chaotic and last a good 1.5 hours.

Speaking of bad feeding, after the pediatricians, hubby had to go to work. I dropped him off and for the first time, I drove home alone with BG. Thankfully, she was asleep. I was dreading driving home with her screaming like a banshee. I knew she missed a meal and would be cranky.

Anyway, the entire drive home, I drove moderately and kept checking on her at every red light. Unlike hubby who seemed to hit traffic everywhere and swerve left and right to avoid crazy drivers, everyone seemed to be ok around me. I was extremely thankful.

We made it home, parked the car, snapped the stroller together and made it back into the apartment without a peep. Thank you Jesus. She even tolerated the heat wave fairly well.

I immediately prepped some formula for her and arranged her for the feed. I woke her up and fed her the entire bottle as well as the breastmilk I pumped before we left. I changed her diaper. I’m going nuts. How do you tell your baby peed? These diapers make it difficult. I swear it’s always moist. I redressed her and swaddled her.

I cuddled her and sang her to sleep. I put her in the bassinet and proceeded to pump. 6 minutes into the session, she screams bloody hell. I check her diaper, I cuddle her and even multitask and drink some soup while rocking her. She doesn’t stop.

The last thing I can think of is food. I drop her in the bassinet screaming as I prep the formula and tube and tape the sucker onto my breast. I grab her, undress her and latch her which takes forever as she’s red as a turnip and flailing her free arm. 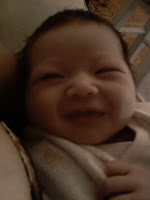 After several failed attempts, we stick it and she nurses. I’m so exhausted at this point (no naps since 5am, pediatrician appointment & first drive home by myself) I just let her continue to soothe suck and drink even though she looks tired and near sleep. ½ way through the formula, she stops completely. I de-latch her, burp her, change her diaper again (they always feel wet.), clothe her and swaddle her.

This time, I’m reluctant to put her in the bassinet just yet. I cradle her as I read my emails. I look down at my baby girl and she poot smiles and I laugh. The above photo is one of her poot smiles I captured with my cell phone. I give her a gentle kiss and tell her I love her, smelly poots and all.

I finally make the attempt to put her down as I realize that I have not pumped my breasts since 4:30pm. I know she’s been sucking on them since but I’m still hoping to increase my production.

I put BG down in the bassinet and rush to do everything before she wakes up again. I go to the loo, wash formula mixing stuff and prep formula for the next session, just in case she wakes up hungry in less than 3 hours.

This is when I notice my hubby has put the television remote in the fridge. Yes, the remote is in the fridge. I took a camera shot of it for memory sake.

I grab my laptop and hook up my boobs and begin pumping. I pumped for 30 minutes. During the session, hubby comes home upset. I’m waiting for him to tell me that he’s upset because he knows I don’t want him to go to the gym so I can get some shut eye.

Instead he tells me that he received a ticket on the motorcycle because he didn’t move it and in his sleep deprived state, he lost his cell phone, my only lifeline to him when he’s not here. I grab my phone to call his phone when I notice I missed a call. I call it back and a gentleman named Andy says he has my husband’s phone.

Hubby takes the phone and thanks the man profusely stating that he’s kicking himself because it has a ton of newborn photos of his daughter and is the only lifeline to me when he’s not home. They arrange to meet and hubby gets his phone and our first photo of BG poot smiling thanks to a good Samaritan.

Now, I’m going to nap until her next feeding.

On a side note, even though hubby has been driving me nuts and treating me well at the same time, I’ve never felt more love for him than right now at this very moment. I don’t know why but it is very intense right now. I know he should be here more often but he’s not going out to party. He’s paying his dues to go towards his goals and I guess that’s why I’m not stopping him. Besides if he was here, he’d probably be so grumpy and moppy that he’d drive me nuts.

Anyway, I just wanted to say that. I love my husband and hope this tiredness, grumpiness and all around exhaustion will end soon so we can cuddle and take a long long nap.

Milestones:
First mommy/daughter car trip - From Chelsea to home
First time mom set up stroller and car seat by herself – And she didn’t even wake you Gold star for mommy
First time mommy had to set you down while crying so she could sanely get you to stop crying. – I wouldn’t if I could have sprouted a third arm but sometimes, you need to learn that I can’t be there for you immediately but that doesn’t mean I’m not feeling your pain. Trust me. It hurt me to put you down crying but I knew it was for the better.
First time mom had to do two continuous feedings back to back. – Talk about feeling like a cow. I’m certain this won’t be the last time either.
First photo of BG's reflex smiling while sleeping. – Btw, this photo keeps me going, baby girl.
Email ThisBlogThis!Share to TwitterShare to FacebookShare to Pinterest