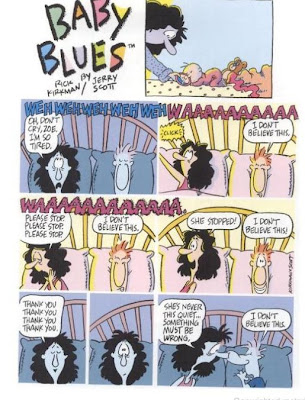 After seeing BG fidget and fuss whenever hubby feeds her, I relented and gave him a bottle. She immediately quieted down and was satiated. I think it has to do with the position in which she is held and the tension she feels with hubby finger feeding. She didn’t look comfortable at all during the finger feed.

With the bottle, hubby can cradle her which she prefers. Will this affect breast feeding? I don’t know and I don’t care at this point. If it alleviates her fussiness and the amount of air she’s sucking up during feedings with dad, so be it.

Today so far, we’ve had 2 feedings together. Each time, I have used the SNS and just followed BG’s queues. If she falls asleep, I delatch, swaddle and put her to bed. I’m not forcing her to finish anything nor am I forcing her to stop. I’m also letting her sleep past the 3 hour mark if she so inclines. Am I setting up bad habits? I’m not sure if that’s going to help or hinder but I feel like I need to bootcamp nurse right now.

She fell asleep after he last feeding rather quickly which gave me a chance to catch a 20 minute snooze as well.

Hubby and I have had different experiences with BG. Feedings, Diaper changes, Cuddling are all different. This has lead to some conflicts. I guess that’s normal.

I don’t think there is a wrong way or a right way to parent a newborn but when you’ve got two people caring for a human being, it’s hard not to have conflicting opinions.

Right now, hubby is pretty confident that BG prefers sleeping on her tummy. Who doesn’t but everything says to place her on her back to sleep for the first few months. The doctor said if we want to do a tummy nap where we are watching her, by all means do so. However, the majority of the time she would be safer on the back.

Hubby thinks putting the Boppy in the crib and putting her in it is safe. I beg to differ but he says I’m only making his life and my life harder as she sleeps on average 2-3 hours on her back versus 5-6 hours on her tummy on the Boppy.

I don’t know what to say to this. I’m against this but he thinks I’m overly paranoid. Anyway, so far I’ve been doing the back thing and he’s doing the Boppy. Sure, I wake up more often and it takes longer to put her down but I feel more assured when I do it and I can nap a bit better.