Seems like it’s hard these days to not go a day without talking about baby girl.
Today, I am making an extra effort as today is our 5th wedding anniversary. I’m planning a nice quiet steak dinner at home. We’re not party people so this will suit us fine. I just need to pick up some potatoes on my way home.

We were talking about how we can tell our daughter later on in life how we both met in 1995, dated in 1996, engaged in 2001, married in 2003 and started a family in 2007. Yes, the point is, there was no rushing and we made it a point to get to know each other and do a few ‘me’ things before we dedicated ourselves to family life.

I know this isn’t everyone’s cup of tea. I have had plenty of friends who were married within 2 years of meeting each other and started a family within 3-4 years. For us, there was too much work and personal stuff we each wanted to do before we started our next chapters together. To each his/her own but there has to be mutual agreement or dedication and that’s the point we want a children to learn.

On Valentine’s Day I bought hubby a card from me and the baby. Since this is a wedding anniversary, I’m focusing on just us. The fifth year is traditionally wood and silverware but I couldn’t think of anything anniversary worthy for my guy so I am playing off of silver for his gift. I’ll tell you later what it is.

All in all, I feel very lucky and blessed to have what I have. Not many people can say that they are happy and with my hubby and with all the craziness of work and life, I’m just glad I’m going through this crazy life with someone as supportive as hubby.

UPDATE: Ok, here it is. I couldn't figure out something wooden or a silverware my husband would appreciate so I played on silver and got him this: 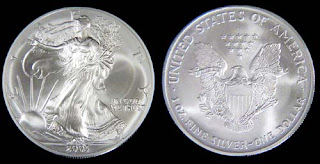 It's the 2003 American Eagle Coin. He asked me if it would be ok to purchase a newspaper with it. I suggested to stick with quarters.

Anniversary dinner was great and we both spent the night relaxing and cuddling, with the Snoogle, of course. Yes, I gave him a peace of it to share. Like the fuddy duddies that we are we both fell asleep cuddled up to the Snoogle. I'm telling you, this thing doesn't just have cotton poly fill in it. The Snoogle has magical properties that help you sleep. I hope the Boppy everyone tells me is a must for babies has just as much magical properties for breastfeeding and what not.
Email ThisBlogThis!Share to TwitterShare to FacebookShare to Pinterest