I went for my official prenatal bloodwork today. Things appear to be good. I also scheduled the FTS in 3 weeks.

Your dad is going to help me with the fingersticking that needs to be sent to the lab prior to the ultrasound.

I'm not grossed out by blood but the idea of sticking myself is not appealing.

When I was younger and spent many summers away from home, I was the girl people ran to when they were hurt. I washed bruises and cuts numerous times. I'm ok with blood and guts. I'm not cool with poking myself. Go figure. This comes from the girl that stapled her finger when she was 10.

Anywho, dad only had one question for the doc, "Is Bean healthy?" When I came home with your ultrasound, dad went through the books again to find out where you were in development. 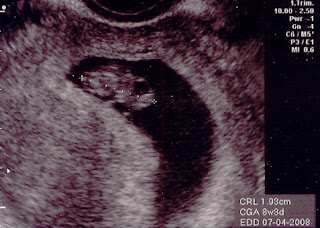 Then he read the chapter on how pregnancy effects the male. When I asked him if he felt any symptoms he said, "Fear of poverty. Is that a symptom?"

I think he's taking it well. After all, he keeps reminding me that 69% of males surveyed were ambivalent when first told they were to be a dad. As your dad says, "With all the emotions flowing through a woman, a man has to balance things out. We can't have two crazy people running around like nuts."

I think he's excited, deep down inside. It's just harder for him to feel participatory right now as you're living inside me and not him. Trust me, I think you're better rooming with me for a bit. :-)
Email ThisBlogThis!Share to TwitterShare to FacebookShare to Pinterest