This week's 24: So many questions, so many bitchslaps...

First, what’s up with Grizzly Adam Logan? He’s disgraced and becomes a hermit in Los Angeles? If you’re going to wear plaid and an overgrown beard, move to Montana.

Chad Lowe doesn’t look like the beat a man with a MagLite type of person. Then again, he may have taken some lessons from his ex-wife.

So MacNichol isn’t bad? Who would have known? With his jowls and bug eyes, I pegged him for a baddie.

Meanwhile, where the heck is Karen Hayes? Wasn’t she supposed to make it back to CTU? If the writers are accounting for flight time, I’ll give them a pat on the back for continuity.

Prediction of the week: If President Palmer is assassinated, Al Sharpton is making a guest appearance on ‘24’. Please, the two black presidents of the United States of America assassinated would be the kind of high profile racial coincidence Mr. Sharpton pounces on.

This week’s bitch slap goes to Morris. It’s not about you Morris. Get over it. Soon you’ll be faulting Milo for being taller, skinnier and hairier than you. Get over it. I’ll give you the guilt that you gave the terrorists the device to kill thousands of innocents but that’s not what you’re whining about. Shut up, grow a pair and do your job.

Runner up goes to Graem’s whiny wife. Rena, when a person tells you to run, you run. You don’t run back and forth between dumpsters. Keifer was right to dump you. You’re not the tough woman he needs. I understand your legs may be weak from playing Peter Petrelli’s invalid wife but men with guns are chasing you. Run!

Finally, a hug for Milo, for getting shot at. Ok, the hug is for the fact Jack looked at him and pretty much summed up his through and through as a ‘flesh wound’. Dude, you may get shot at everyday. You may get torched and electrocuted weekly. I’m a computer programmer. The closest I get to getting shot out is in Gears of War.

The kill count this week: 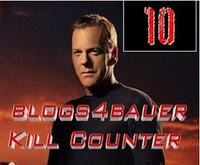