Next week on 24, the Bauers go to therapy.

If anyone has Agent Burke’s number, pass it on to me. That man is hot. Nothing says hot then a suitcase full of torture devices. Anyone else Agent Burke is a submissive during his downtime?


There is seriously too much testosterone running the in the Bauer men. If the last 5 seasons demonstrated Jack had relationship issues with the female of the species, this season shows he has just as many issues with males.

Holy cow, towards the end, I sort of felt bad for shorty Bauer. “See dad, I’m as tough as Jack. I survived Burke and his briefcase of torture and didn’t fold. Sure, I told him I ordered the assassination of President Palmer, the insurance one, Jack’s friends and Jack but I didn’t tell him about you pop. I’m just as tough as Jack, pop.”

I’m the eldest sibling in my family and I can’t say my brother ever had sibling envy but I’ve watched enough television to feel for short Bauer.

Ok, the moment has passed…


I had just finished commenting on how Babe’s Dad could play either good or very bad when he confirmed what many thought, Daddy Bauer is one bad father. Could you imagine the mind games the three men Bauer played during their youth? If Mama Bauer isn’t in rehab right now, she’s probably having her brain fried repeatedly by the Haitian guy in Heroes.

Did you hear the guilt trip he laid on Jack for leaving? I hope we get into Jack and Daddy Bauer’s back story soon. Writers, skip the Rena Sofer’s Jack’s lover and boy Bauer is Jack’s offspring. Wasn’t Kim enough? Jump to the juicy. What made Jack leave his dad’s business? What is Daddy Bauer up to? What did Jack do to make Daddy Bauer ok the assassination of Jack? What was game night like in the Bauer household?


Right now, Jack is probably thinking China was better than the hell he’s in right now. Brother just admitted he tried to kill him several times, ordered the assassination of his friend and boss, President Palmer and ordered the murders of colleagues Dessler and Almeida. He’s about to find out he’s pushing up daisies, his dad is not going to win Father of the Year and that his credit score is kaput due to missed mortgage payments the last 18 months.

Next week we have a Valentine’s gift from the 24 gang, 2 hours of Bauer family hijinks. How Jack didn’t grow up to be a serial killer is beyond me.

The kill count this week: 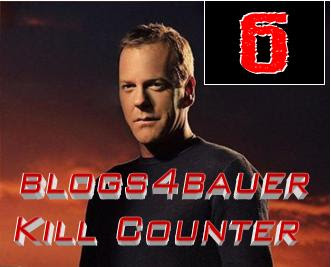