What, no silent countdown?

The following thoughts happen in real-time. 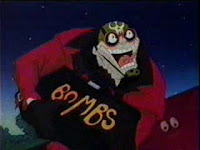 Jack and Ginger tails The Evil Midnight Bomber What Bombs at Midnight’s handler.

I never noticed how banana faced the Six Feet Under guy was. Morris the cat needs to take orders and stop acting as a consultant.

At this point, Lrudlrick turns on the surround sound and it felt like I was actually sitting in the conference room in CTU.

Curtis don’t get upset. Bacardi and Cola is a classic.

Couldn’t Bauer say, “Excuse me?” No, he just pulls a guy out of his SUV because he couldn’t take the Yaris anymore. Come on, come into my Yaris. You’ll love the gas mileage it gets.

Anyone wondering if Apple is negotiating with ‘24’ to use an iPhone next season?

I’m not keen on the blue chairs in the CTU conference room. They look too blue.

Father and son have some weird hairdos. You want me to deliver an unmarked package? Do I look like UPS?

8:21am Morris has got to get the chip out of your shoulder and just do his job. Milo and Morris should just duke it out.

Nuts. Why did they have to put a picture of former president Palmer up? We don’t need to be reminded Wayne isn’t his brother.

Man, a Cherokee can take a beating. Bacardi and Cola is back! Who the heck is the chick in the backseat?

If you were a nurse, wouldn’t you have injected him with a sleeping agent or hinted at sleeping pills to your son?

Man, you could read teen angst’s face, “I’m such a loser. I have no balls. I should have shivved him when I had a chance. I suck.” Keep building up that angst kid. You’re going to need it for the big scene where you yell at your dad.

8:27am Commercial break. It’s like every cellular network is buying airtime during ‘24’.

8:32am Shouldn’t the prisoners have anklet restraints?

227 is being detained in a facility that looks like a public school. Would the FBI let them speak to each other? I don’t want to be released Wayne, I want to stay here and get an inside look at the civil right violations.

8:41am and Kumar is still making the pain face.

I guess Ford is out and Toyota is in.

Someone tell me what Dr. ER has hanging from his rearview mirror? Are those lanyards?

No, you don’t know me but stay away from my partner. He’s mine you hear me, mine.

Corporate blue is in this year on ‘24’. Blame it on the resurgence of skinny ties and form fit shirts.

Is that an IBM ThinkPad? Geez, he must have gotten that relic from my FIL.

Yikes, next time, buy a Toughbook.

L: Why doesn’t anyone listen to Jack? If they listened to Jack, that guy’s brain would still be in his skull.

Welcome to Con Air flight #589. Your pilot will be Samuel L Jackson and your co-pilot is Nick Cage.

8:48am Commercial break. Palmer Classic on an Allstate commercial.

8:53am I wonder if Con Air serves a full meal or if it’s just a snack.

Who are you? Who are you? I was expecting an Arab. Thank God it was only money. I thought it was a bomb.

Why are you rationalizing with Marcus? Now dad gets wise? Holy crap. Hit him again.

L: This doesn’t make sense to me. He’ll fight this guy but not the kid whose injured?

Great, a nuclear weapon. You know what that means, casualty figures.

Cool it, Curtis. Stop pouting. Don’t make me a call a time out.

That’s a pretty large plane to be transporting criminals.

Next we see Terrorist Jon Lovitz, he’ll get rid of last season’s prison orange for a more up to date attire.

Morris and Milo that’s the new comedy team at CTU. Chloe is fed up with Morris’ bs and so am I.

There goes the obligatory casualty graph. Inside sources said they tried using frowning faces but test audiences gave it a negative reaction. L: It’s like the graphics designer played Robotron a lot as a kid.

Wayne, it’s too late to apologize. Jack’s hands look nastier and nastier as the hours pass. It’s like the time I painted my hand with rubber cement when I was 10.

“What did China do to me? You don’t want to know what China did. Water torture and fire drills don’t hit the surface.”

So The Critic is the key to detonating the suit nuke.

Is it just me or does a suit nuke look like a cookie press? You don’t need to

Dad has some balls. Oh man, he chose? I guess that marriage is ending soon. Another Panasonic phone.

L: Dad needs to go Keyser Sose. I swear there are 20 million ways a little old lady could take down Kumar.

“I love you but we’ll need serious counseling after this.”

351 old mill road. How many people are going to chose 351 for tomorrow’s lotto drawing?

Oh great, Mom called 911. Anyone else recall what happened last year when someone called 911?

L: That’s a smart thing to do.
Until the terrorists intercept the call and send ‘cleaners’ to your home.

9:13am commercial break. I think I may be one of the only people in NYC aside from my husband who has never seen an episode of American Idol.

9:19am Chloe is the slut of CTU. Who knew. Didn’t she sleep with the informant last year?

L: Give him the payphone number so they can triangulate and narrow the search perimeters.

Just noticed we’re back in the White House. I wonder if they took the West Wing’s set.

Curtis’ look was the look every New Yorker had last week when the unknown gas smell wafted across the island.

Come as you are? Are they quoting Nirvana?

Palmer just said loyalty. This draws a red flag up in my radar for Droopy.

Kumar’s high is going down.

That was a great scared look Kumar.

Has Bauer killed anyone in the last two hours? Maybe he is getting soft.

I was right, the facility is a school.

Stop being a lawyer and look at the whole picture! Something is going on here and we need to know what it is.

My guess is Cola’s brother died in the war against terrorism. Cola, don’t be a hero!

L: That’s why he’s Black Jack. He has his own demons to fight.

Don’t make me shoot you, Cola.

Oh man, poor Jack. And it’s not like he’s eaten anything so that was all bile folks.

Bill, if I could cry I would but I’m completely dehydrated and spent.

L: See, you said he hasn’t killed anyone lately. They were saving it for something big. Now he’s just Bacardi straight up.

Is it safe to shoot near a nuclear device? L: Yes, why not?
That’s why not.

L: Jack, you quit and the US goes to hell in a hand basket.

Jack, it’s Bill. See what happens when you quit? A nuclear bomb goes off in a residential neighborhood.

Not again, another 4 ‘visitors’?

Ok, so The Critic and Dad blew up but what about Fayed?
Next week: Holy crap, Bluetooth man is back and we have confirmation Fayed made it out. He’s like a frickin’ Dalek. 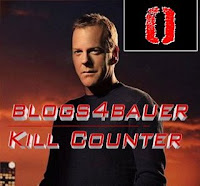