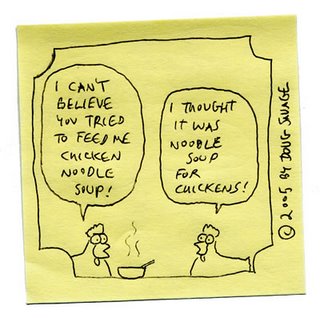 According to a survey completed by the Economic Research Survey of the Department of Agriculture, the average household spent $40/week/person for food in 2004. Married couples without children spent an average of $32.50/week/person.

Now since I can’t find the complete study I can’t tell if this is a calculation of food eaten outside of the house (i.e. restaurants) only, a combination of food consumed at home and food purchased outside or just groceries. I tend to lean towards the later, especially since the price of food at a restaurant can fluctuate more so than groceries.

Considering inflation and locality increases, we’re about par or just a little over. This shocks the living daylights out of me. Lately we’ve been brown bagging lunch and breakfast and we’re still hitting the average zone. I think what helps is that I make bulk meals that last us for longer periods of time.

I love grocery shopping. I think I love it more than shoe shopping. The only problem with grocery shopping is having to pay for it at the end of the trip. Every time I go shopping I think of that scene in ‘Yours, Mine & Ours’ when Lucille Ball and Henry Fonda go grocery shopping. The cashier is standing at an old ribbon crank cash register and the receipt is spewing out ribbons like an old stock ticker. The family has 3-4 large carts filled to the top and as crates of milk, eggs and bread are calculated Henry Fonda gives this exasperated look on his face. At the end, the cashier finalizes the amount hands the receipt over to Henry Fonda and says something along the lines of “That’ll be $135.00. Would you like to check the receipt?”

I don’t mind spending money on good food that we’ll use. That’s why we joined a local CSA. I’m just always at awe on the amount of money we spend on groceries.

I spend the most money on vegetables, fruits (preferably organic) and hunks of meat. I’m a big Norman Rockwell roast on the table fan. I love making meals into an event worthy of sitting down at a table. When I was a kid, my grandparents always made us eat at the table. My parents did but as we got older, it became more and more lax.

It’s important for me to set the table and serve a meal. Once in a while we’ll do a pizza and movie night where we’ll sit and eat in the living room but there’s nothing like sitting at a table, one dog lying under the table waiting for fallen treasure, another dog sitting next to you following your fork as it ping-pongs between your mouth and your plate and savoring a well prepared meal.

This week, I plan to attempt to make wontons. I haven’t made wontons since I was a teen. I know this is odd for the weather, but I’m hankering for some comfort soup. Fresh wontons, silky broth, fresh egg noodles and matchstick bamboo shoots, baby bok choy and ginger root sound like something I really need to restore my body and soul.