It's sweltering out. Let's talk about comforters.

My current mattress is an all latex kind that doesn’t have springs; it’s super comfy. My husband is a night owl and used to stay up until near exhaustion. Now, within 1 hour of his head hitting the pillow, he’s out like a light.

We have a mattress pad cover to protect the mattress and use a fitted sheet, a flat sheet, a blanket and a comforter(in the summer, we use it as a bedspread only). We don’t use a bed skirt (aka dust ruffle/pettiskirt) because we like a simple bed and we only use two shams and two pillows.

I have two sets for winter and two sets for summer in my linen closet and I try to replace a set every few years. I also have an extra comforter and three duvets. Personally I hate duvets. The only reason I have three duvets is because I used to have three down comforters. I’ve since donated two and kept one. Duvets require too much effort rolling and unrolling the comforter into it. It also involves periodic shaking to ensure even distribution of the down/comforter. Still, my comforter I’ve kept has this design on it that can only be described as Holly Hobbie-like and my husband is not a fan of it. So I use a duvet cover to save money.

With my MIL coming in August, I figured this would be the perfect opportunity to replace a set of sheets. I went to Macy’s to check out the offerings yesterday. Now, I’m generalizing but I don’t know any New Yorker who likes Macy’s. The store would make a Buddhist monk curse and throw a temper tantrum. First, there is the mish-mash of elevator banks and escalators. Then there are the half floors (Yes, there is a 1 ½ floor) and the elevators that don’t stop on all floors. Lastly, you have the tourists. It’s a frickin’ store! No need to ooh and aah at the mannequins right in front of the entrances. Keep moving!

I will tell you the 7 times I purposely go to Macy’s:
1. Junior Prom. There was a blow-out sale and my girlfriends wanted to get our gowns together. We wound up going someplace cheaper.
2. My engagement. We got the ring appraised. I had a pretend I-can-afford-a-dress-here dress-up at the bridal boutique with friends. We researched what should be in a bridal registry and later found items cheaper on-line.
3. Tours for family members obsessed with shopping. Yes, I add to the tourist bottlenecks.
4. To get out of the rain. Even then, May times I'll endure the half a block to go to H&M to wait it out.
5. Cooking School.
6. Researching linens and bath towels.
7. Wednesday Coupon Days.

Notice that 6 of the 7 reasons to go to Macy’s does not include walking out of Macy’s with bought items. Since most of my family is acquainted with Macy’s and since my prom days are through, I rarely go to Macy’s now. It’s just too frenetic.

Anyway, I usually go to Macy’s to scope out the fabric, colors and designs and then search other stores for discounts or similar design schemes. I’m usually a Royal Velvet girl but I can’t find them at Macy’s or any other retail stores. Anyone know what happened to Royal Velvet? I only see their bath towels at Bed, Bath and Beyond.

As I’m looking at the display beds and feeling the material, a sales lady proceeds to school me what makes a well dressed bed. I find this rather insightful and amusing. I had no idea a pillow isn’t just a pillow. For instance, did you know that on a properly made bed you can have 4 types of pillows? There is the Euro, the Standard/King, the Standard/King Sham and the Bolster. Good grief, Charlie Brown. In my household, if the dog’s ass isn’t on the pillow, you’re in good shape.

I told her that if I brought all those pillows home my husband would smother me with one of them in my sleep. She smiled but didn’t seem amused at the ‘death by pillow’ scenario. She then proceeded to tell me that a good comfy bed also has a featherbed or the alternative fiberbed.

As a child, I don’t remember making my bed being such an ordeal. I’m keen on having a tidy bed and it just seems to me a mattress pad, featherbed, fitted sheet and a flat sheet seems a bit too much. Do they shift? Between the two dogs and us there is some form of flailing going on each night. Our sheets need to be tucked in securely. Do I really need a featherbed/fiberbed? Isn't it just a comforter I sleep under?

In the end, I left deciding that in addition to the new sheets, I want to get a new comforter with a design so I can get rid of the multiple duvets and a couple of Euro pillows. Just in case you didn’t know a Euro pillow is a square pillow with a firm fill that most people use to prop themselves up for reading. I figure I can go to the craft store this weekend, pick up some fill and make my own and save the $50.00 a store would probably charge for that sucker.

For the new set, I’m leaning towards almond colored sheets with a red/natural comforter. The comforter colors will match with my existing sheets nicely so I can reuse the comforter as a bedspread throughout the seasons.

As for the rest of the parent-proofing, the bathroom was updated this weekend. Our new theme is ‘Americana’. Lrudlrick picked out a vinyl curtain with route 66 attractions and such. It’s the one place my husband likes to multi-task, I suppose.

I saw a quilt pattern at the craft store that I plan to pick up in addition to the pillow fill Saturday. It’s a cloth pattern of a map of the United States and I plan to frame it and put it on our bathroom wall. Along the frame border, I plan to tack with removable tack laminated postcards we received from friends. I think we have more postcards from places outside the US but I think we have enough to make it interactive.

I also picked up a no slip bath mat so my MIL won’t rehash the ‘this guy cracked his skull once’ story to me. Now we just need to replace our toilet seat and get a bath mat that fits our odd angled bathroom and we’re set. 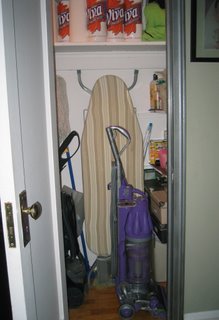 Lest I forget, Lrudlrick started cleaning out his closet to my amazement. Even more shocking was it sort of looked the same to me 5 hours after he was done. I know he did take stuff out too because he had a garbage bag of stuff and he moved his tool box and assorted man tools into the utility closet which I cleaned on Sunday. Finally!Lrudlrick won’t let me give away the steam cleaner though so it’s still in there but I was able to make enough space to store the tools and a box of manuals.

Above is the full utility closet. There is an extra shelf on the top I didn't catch that holds extra comforters and linens for the aerobed. 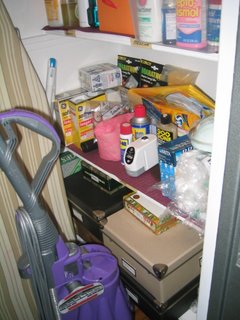 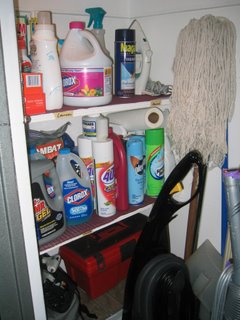 The cleaning stuff and tools.
Next week, if I don’t sweat to death, I plan to tackle the coat closet and the bookshelves. Slowly but surely we’re making progress.