This week's 24: A test of suspension of disbelief

First, Heller is alive! I’ll believe it when I see it. Not that I don’t want him to be alive. He is my top dog sugar daddy. I just find the only reason to keep him alive is 1. He’s Bill Devine. 2. He’s the new president but even that’s shady because he’s only 6th in line of succession. 3. He’s flippin’ Bill Devine.

Slimey Miles has the balls to threaten Scarecrow? I love the use of the word ‘allegiance’. His brown nosing capability is just sickening. Sadly, in my short time in the workforce, I’ve seen my share of Slimey Miles.

Sure, the plane stopped just in time to avoid wing clippage. Co-pilot, Shweaty McSweat Sweat probably wet his pants but he’s got a great story to tell at cocktail parties.

No one saw Jack cross the road nor did they see the black SUV driving Northbound during martial law? I’d believe it if his invisibility hoodie was up but it wasn’t.

The President of the United States would never take the chicken shit way out. So he wasn’t elected but still, it’s a bad move. If all he did the last 18 months was for the sake of this country, he should realize blowing one’s brains out after a chigger of Johnny Walker Black is not going to do the US any good.

Also, I find it highly improbably that Weezie would blow his brains out. He would point fingers at everyone before he let the fallout be on himself. Who is this Graham guy and why is controlling everything. Is he ‘The Man’ that we all want to stick it to?

The Jack Bauer I know would not take 15 minutes to make out with Audrey, post slicing. Sorry, that's not my Jack. Bring the real Jack back.

Aaron is alive! It’s like ‘24’ this week was a cast reunion. All we needed was Tony back from the dead. I’m glad Aaron is alive but the torturing of Aaron was unnecessary. The man just saved your maniac depressive wife’s tookus. Maybe you should be thankful. Wait, on second thought… 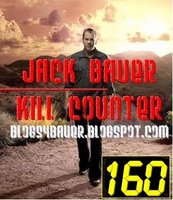