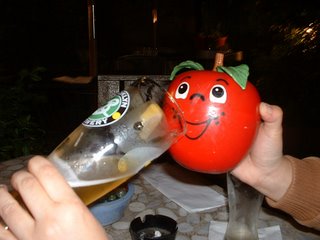 Muthafunga and I are 6 years apart in age but from the moment he was able to walk in that rickety walker, yes the kind that were recalled because kids would tip over and hit their giant craniums on ceramic floor tiling my brother and I still found a way to get into a boatload of mischief.

Sure, I was pretty protective of my brother. In school and outdoors I felt I had to play the big sister but when we were home alone, we were the same age, trying different things and attempting to get away with it.

Oddly enough, a lot of my memories center around objects. I suppose this all stems from the apple incident. 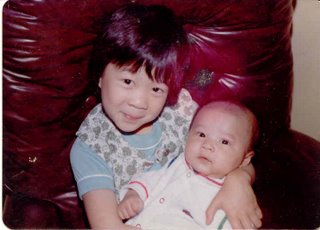 My mother had just allowed me to hold my brother for the first time. Since he was a hefty squirmer, I was only allowed to hold him while sitting on my grandfather’s soft as a baby bottom leather recliner. Even on that giant chair, I couldn’t really keep a hold of my wiggly little brother. In between photos, my mother would run back and catch my brother before I dropped him.

Notice the giant cranium my brother had. When he was old enough to run around in the walker of death, he looked like the spitting image of Boss Hogg from Dukes of Hazzard. I’d scan a photo but it’s in my brother’s baby album in my mom’s house but trust me when I say he looked like Boss Hogg. Also notice my Pixie haircut. Back in 70’s and early 80’s I had the Crystal Gayle hairdo. That was until someone decided to spread lice at school. That was the end of Crystal Gayle for me and the beginning of the Kathy Rigby and soon after the Dorothy Hamill. If I didn’t know better, I would swear my mother wanted me to be a gymnast. I didn't start growing my hair long again until 6th grade to non-parochial school folk junior high.

Well soon after that photo was taken, my mom put my brother down for a nap at which time, I decided to prove to my mom that I was a good kid who cleaned up not just her toys but her brother’s toys.

With my brother asleep, my mom went to the kitchen to help my grandmother prepare dinner. Grandma was cleaning and cutting up fish. I remember this distinctly because of the Chinese cleaver my grandmother used to emphasis her irate words to me later on.

There was this toy apple called ironically Happy Apple. It is a pretty large roly-poly toy. According to the description at this old toy, it measures 6 inches high and 4.5 inches wide. If anyone knows of the toy and knows the exact weight, I’d love to have that info. For a small child, that thing was pretty heavy. Back then, toys weren’t sanitized for safety. It didn’t have rubber encasing the apple. It didn’t fold onto itself if punched. It was solid hard plastic. 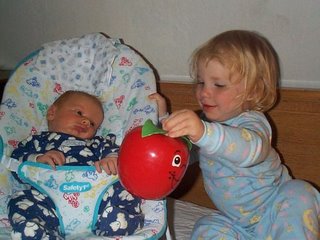 The image to the right, borrowed from schwartz- omalley .com, shows the size of the Happy Apple compared to a baby’s head. Well in my fervor to clean up, I hoisted this sucker into the crib forgetting my brother was napping in said crib. The sound of the jingling apple hitting my brother’s noggin was loud and distinct. Do you remember the sound a log would make on the head of Wil E. Coyote as it pounded him into the ground? That's what it sounded like, a mix between a pop and a loud tongue flick.

At the very moment the apple made contact with my brother’s head, I had an image of my second grade teacher, Sr. Rosario telling me, “Remember, a baby’s head is really soft. It takes time to harden into the tough skull you have. Be very careful or you could hurt him.” I think I screamed before my brother let out his wail. In fact, I probably screamed louder than my brother. I ran over to my mother and grandmother who was also screaming but in Chinese. “Why are you screaming like that, little pearl! You nearly caused me to chop my fingers off!” Little Pearl was my nickname in Chinese. It could also be interpreted as Little Pig but my mother swears she meant the later.

I think I blurted out something about nuns, apples and dented skulls and how really sorry I was and that I didn’t mean to hurt my brother.

To this day my mother says that I made more of a fuss than my brother did. In fact, she is right to say I was probably more fussy than my brother in all aspects. Personally, I don’t recall. I was so caught up in my own fear and anxiety it was completely possible my brother slept through it and I woke him up with my feeble and frazzled attempts to check his skull. Weeks after, I would occasionally check on him while sleeping to make sure his head wasn’t dented in. Even at that early age, I knew a dented head would lead to a lifetime of guilt.

Muthafunga, you probably don’t remember any of this but honestly, it scared the bejesus out of me. I guess parochial school and Chinese parents can lay the guilt on thick even at that early age.

I’m not sure if mom still has that apple in the attic but if you want a memento, I can try to win it on ebay.