From nothing to why I will pay extra to fly JetBlue...

Am I a cynic?
Have I become jaded?
Why do I feel like Corporate America has infiltrated my life? To be honest, I’m probably just noticing it.
L: Don’t think going to Europe is going to help. It’s only a matter of time before it happens in Europe.
Now, I’m not saying I’m going to do a Johnny Depp and live my days in some provincial town. I love America but I’m just getting tired of the politics that surrounds everything. It’s who you know. It’s who likes you. It’s making nice and playing the game. I don’t want to play the game.

My husband works in market research so if anyone should realize how much we get played, it’s me but I guess I just didn’t want to believe it.

Lrudlrick once told me about how Budweiser kept sponsoring local events in P.R. just to get brand recognition going. Apparently in less than a year of doing this, the kids in P.R. knew Bud

Oh, I also learned last week that if I were to become a parent, my fears of being selfish would be untrue. It’s a long story that involves watching a family of 6, where the kids were all under 8, and the process that took place getting ready to go to Disney World. In short, I’m guessing if the time comes, I’ll do what I have to do especially when someone depends on me. 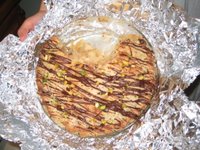 Before I ramble any further, I should finish my pie adventure.
Well, after the contest and the whole pro/amateur debate, we went home to pack. Lrudlrick was and still is extremely irate about the whole thing. Personally, I think if anyone should be miffed, it should be me but I’m not going to cry over eaten pie. Still, when Lrudlrick gets his mind set on something you know how stubborn he becomes. He’s contemplating contacting corporate sponsors. I told him to do what his conscience tells him to.

I agree that professionals/commercials should not be part of a home cook competition. It is clearly stated in the rules.

Anyway, we were pretty happy to head home, especially since we get homesick fairly quickly. It’s hard for the lungs to adjust to clean air and our ears to the lack of noise pollution.

The only thing we had to deal with when we got home was picking up our pooches, bathing our pooches and ordering pizza.

That’s what we thought. Apparently, Orlando International Airport is the worst airport for check in. Because of the craziness of our initial flight, I wanted to be sure that we got to the airport early enough to handle any crises. I used the excuse that if we got there early there might be a slight chance we’d get an earlier flight home. Lrudlrick bit and we were at the rental car drop off 2.5 hours before departure.

When we got to the check in area, it looked like the definition of chaos. There were no lines but massive crowds of people. We tried self check in but that was even worse. Somehow we got to a self check in kiosk where I decided with the chaos around us, we should check both of luggage, not just the kitchen bag. This proved to be a wrong move. After we self checked in, a lady screamed out our name and threw two luggage tags at us and told us to go to luggage check in. We asked her where that was as people shoved past us to get to the newly freed kiosk. She pointed her finger behind us and circled it. What the heck does that mean? Was she a witch trying to make a sign magically appear?

Anyway, there wasn’t a sign to luggage check in but there was a long line behind us with a people dragging luggage so we hopped on. Luggage check in consists of a person telling you to put your luggage behind a rope and leave. Seriously, leave. I kindly told the guy I wasn’t leaving until I saw him put my luggage in the giant contraption. He looked perturbed but hey, they say never to leave your bags unattended.

We then went in search of our gate. Now there is a reason why MCO has a hotel built into their airport facilities. Our line to get past security to get to the gates reached past the front door. At MCO, international flight security is not separated from domestic flight security check in. So we stood online for 35-40 minutes. It was like a line to a Disney ride without the ride afterwards.

By the time we got to our gate, we had enough time to hear them begin boarding our flight. Here is a warning to all who fly out of MCO, get there at least 3 hours in advance, especially if you have kids. It took us 2.5 hours from car rental drop off. There were some people who missed their flights completely.

The flight was less embarrassing. This time the attendants were smart and did the actual live presentation. The co-pilot was obviously new because he was very young and seemed to hesitate when speaking still it was much more relaxing. Especially since we asked for the emergency exit seats which added extra leg room.

With the chaos at MCO and the cattiness of pie over, we stepped off our plane happy to be home. The plan was simple, Lrudlrick would take the Air Train to Howard Beach to pick up our car. I’d run to the baggage claim to pick up our bags and meet him outside of arrivals.

We both bee lined to the bathroom and as I was washing my hands I realized Lrudlrick was missing a key to his plan, the actual key to the car and the ticket to pay for parking. He had given them to me so he wouldn’t lose them. I call him frantically on his cell and by the third call he realized he was missing the keys. He met me at the baggage claim area. For those interested, Delta’s baggage claim area smells like a mix between high school gym locker room and wet dog. Anyway, we watched as every bag known to man went through, even one bag that exploded sending kids shoes and shirts everywhere. We even watched as a 70 year old man walloped a 9 year old girl with a bag that could have fit 2 of her inside. Lrudlrick had to move the little girl’s older brother out of the way when the 70 year old swung his second body bag towards him.

We eventually found our rolling luggage with the kitchen supplies but our duffel with our dirty clothes was missing. To the left of the claim area, an attendant started lining up luggage that was unclaimed. It looked to be a car full of luggage. That’s when Lrudlrick and I realized that Delta must have switched luggage carts. We went to the baggage agent and reported our bag missing. He said he couldn’t find it on the next flight but that he would register the bag as a delayed bag. He’d have it delivered to our house when it arrived in NYC.

That was it for my husband. I think I literally heard something snap in his brain. I know something is truly wrong when Lrudlrick goes silent. In silence, we went to the Air Train without our dirty laundry.

pg: I’m sorry I dragged you through this craziness.
L: Don’t be. I had fun and you needed an assistant. Just next time, we’re flying out of LaGuardia. We didn’t have these problems with JetBlue.
pg: We flew out of JFK for JetBlue.
L: We did?
pg: Yes.
L: Ok, next time, we fly out of Newark.

Lrudlrick was right; the air train is slow and we were the last stop on the train. We chuckled a bit as a man tried to roll two extra large rolling carts by pushing them rather than pulling them. When he tried to push them off the train, the wheels got caught and he went flying. Cell phone, travel maps and what not flew everywhere. The polite person that I am not, Lrudlrick, told him to drag them behind him. Ok, I try to be but that was just bloody funny.

We get to the car and if you thought nothing else could go wrong, our ticket didn’t have a time stamp so they computer couldn’t read it. We held up the check out line while the supervisor was called and peppered us with questions on when we parked the car.

We made it to the kennel, picked up the pooches. As Lrudlrick walked them, I went inside to settle up and told the young kid that I was here to settle P and Z’s visit. The young black kid turned sheet white and said he gave them to a man that said he was their owner. I laughed and said you checked his name, right? “Yes” Don’t have a heart attack, that’s my husband. I’m here to pick up their toys and stuff. He laughed and right away gave me a summary of their stay and yada yada. We drove home with the windows wide open to avoid choking to death in kennel smell.

With the baths and parking, we finally settled in around 9ish. 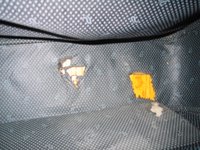 Our bag finally arrived. Your guess is as good as ours. Although I think it was one of the bags used in the scene in Liar, Liar. 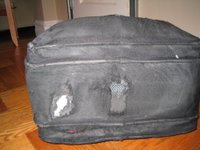 Well, it arrived at midnight the next day. Yes, midnight. With the bag was a letter of apology and paid UPS label to send it to their luggage repair company. Personally, I don’t see how they are going to fix this but we’ll find out. They may be better off sending me a check of a new bag. If they stick patches on it like my mom did on my jeans when I was a kid, I’m going to be rather miffed. 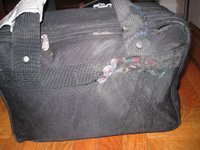 Even better, if it comes back with patches that say ‘Delta’ on it, I’m ebay-ing the damn thing.