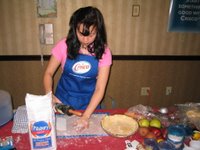 I knew there would be serious contestants but I didn’t know they’d be that serious. I was given this shady look from a couple of contestants. I live in New York City and I’ve had less shady glances on the subway.

Still I smiled and went on may way to meet other fellow bakers. Most were super friendly casual cooks like me. Many were first timers. Apparently the regulars don’t bake their pies on premise. One in particular, Heidi was super friendly and even gave me tips for future contests. Heidi lives in PA and drove all the way here with her equipment to avoid the TSA inspections.

Lisa from Virginia told me that she was weary about the TSA as well, especially since she was flying with a sack of flour. Her mom said that strangely enough the TSA let them board the plane with all their equipment no questions asked. Mental note: Don’t fly out of Virginia.

All in all the fellow bakers were just as I hoped they would be, kind and cordial. We spent most of the time chit chatting and laughing about our travels.

When baking began everyone seemed a bit too serious for my liking but I guess nerves can do that. You’re given 3 hours to bake. I think I was the loudest contestant, cracking jokes and talking to the visitors who are allowed to walk around.

Lrudlrick became my cheerleader/kitchen helper. He ran and got me butter and ensured the volunteer kitchen helpers got the tools I needed. He also became my Isaac and ran back and forth between the bar and me to ensure my nerves didn’t get the best of me.

One of the friendliest visitors was a gentleman named Merlin. A retiree from Ohio, he kept me entertained with stories about his past life and his interests. He even gave my husband pointers for bowling and a list of movies we plan to check out. Lrudlrick and Merlin hit it off discussing classic war movies.

As I baked I noticed there were tons of ‘security’ walking the perimeter of the pie area. I asked them if there were any security breeches and high profile pie pilfers on the premise. They chuckled and told me that I’d be surprised.

By the end, I finished on time and relatively clean. Several of the volunteer kitchen helpers thanked me for making it a light hearted event.

As we were leaving, we heard of an open bar party later that evening for commercial bakers. Being the New Yorkers that we are, we crashed the party and enjoyed the company and buffet.

We met a wonderful couple from Kentucky who dropped everything to start their own chocolate pie making business. Renwick and Clara were extremely candid and answered my questions on diving into a self owned business and the pressures it has on a marriage. They are hoping to be able to ship their delicious pies soon. I can’t wait to have their fresh chocolate pies in NYC.

What I learned that evening was that the pie industry can be political too. Apparently there is a bill in play to make Key Lime Pie an official pie of Florida. Because of such, many commercial pie companies are vying for the best Key Lime Pie title.

I also learned that a majority of the pie council members are also the ones that win the pie awards. I guess the pie industry is a small one but it does seem a little biases towards the major market companies. I’d like to see a small business category for those mom and pops that don’t have such pull.

We ended the night at Pleasure Island and danced the night away. Most bakers went home to bake more pies but I just wanted to have fun. I didn’t want to be sick of pie by the end of this. I wanted to love pie.

What Kind of Pie Are You?