Who's 'The Man'? Really? Are you serious?

All thoughts are in realtime:

I’d like to remind everyone that unlike the wimpy terrorists, Jack set his bomb for 30 seconds versus 10 minutes. If you want to talk about commitment, Jack has them beat.

With the gas no longer a threat, we can now spend the next 45 minutes topping each other with conspiracy theories and the hunt for the allusive 'Man behind the curtain.'

The writers really want us to hate Miles, The Scarecrow and Homeland Security. There were no signs of emotion at the survival of Jack. Immediately they asked about the Sentox and then bee lined to their clubhouse to discuss strategy. Way to endear yourself with us.

Isn't Julian Sands taller than Keifer? 5’11” vs. 5’10½”, according to IMDB. I don’t go around lifting people on a regular basis but I’m sure 5’11’’ Julian, dead weight at that, must have been a doozy for slim fit Keifer.
Nice knowing you Julian. You’re heading to the death ward. It was a nice guest stint while it lasted.

Jack scared = Pantrygirl stocking up on water, Depends undergarments, 44 year old crackers and traveling to rural Georgia to live with her cousins. Actually it isn’t that rural. The darn city has wi-fi so at least my Treos will be online. BTW, anyone know how to turn off the clicking sound on the camera feature? It annoys the flashers on the subway.

Is the actress who plays Audrey dating any of the writers? Seriously, the woman gets more airtime than anyone aside from Nina. Then again, after having the worst day ever, last season, I suppose redemption is called for.

Muthafunga, dares you to name another person who had a worse day last season. Think what you want of Audrey but the woman:
~ was kidnapped with dear old dad
~ fought her way out of a gun battle with 1 gun and a wicked pair of stilettos
~ watched her husband get tortured by her boyfriend and subsequently fatally shot to save her torture happy boyfriend
~ watched her brother get tortured and subsequently kicked out of the closet with a swift steel toe bootnot that anything is wrong with that, being gay not the steel toe part
~ watched her boyfriend die all in the same day.
Trump that CougarBait. That my friends, is the worst day ever.

Personally, Aaron is my candidate so far for having the worst day ever. All the man wanted to do was to do his job a few more years and then retire with full pension and benefits. First he started his day by nearly losing his job outing Walt Cummings. Now he’s spending the day babysitting loon-no-longer-a-loon FLOTUS and Wayne-I-was-a-Marine Palmer.

Evelyn has the proof. Ok, I get it. This season it’s about the wolf in sheep’s clothing. The weakest link is also the strongest lead.

Wayne, small talk, now? Is this the right time? Heck, why don’t you throw in a ‘Can you hear me now?’ You should have called Jack an hour ago. Quit the banter and get to the nitty gritty.

Slimey Miles. God I hate your voice. I don’t know what I hate more, your voice or your smug grin.

Ok, maybe Bill Buchanan has had the worst day ever. Someone give this guy a hug. The man’s authority is constantly usurped.

Psycho Bob rears his ugly self out again. Does David Lynch get any writing credit?

Obviously Slimey has no long term goals. He just likes to be smarmy and have the last word. He truly is a kiss ass of the worst kind. Wipe that brown smudge off your upper lip, Miles.

Lrudlrick, "Doesn't Wayne have people trying to kill him? What happened to the mercenaries roaming the Presidential compound?"

How the hell do you patch cell calls? Seriously, I can’t get my frickin’ speakerphone to work right.

I'm really hating Veeps now, a little too much.

Where the hell are there barns in LA? A meeting at a barn has never ended well. Anyone remember Chase and the whole my boss was willing to shoot me point blank?

Evelyn, it's frickin' Jack Bauer, tell him your deepest, darkest secret. Go ahead. Tell him about that time in college when you had one too many tequilas and your roommate Jessica had that back spasm that had to be rubbed. Jack why the hell aren't you choking it out of her? Are you turning soft in the late hours?

Ego rubs again. Damnit, all these men want are deep hard strokes. Now that I think about it, isn’t that what we all want?

Ooh, Pres Weezie, don't you get it. The guilty are always suspicious. Weezie you’re being played. Open your beady eyes!

Lrudlrick, "And Evelyn is going to die before she shares her secret." Way to go Jack. Make her spill the beans before she bites the big one!

10 people surrounding the barn could only mean one thing. We get to see Jack kill again. Yippee.

I’m Wayne Palmer. I'm brave. I wait until I see the whites of their eyes to shoot. I have to prove although I wasn’t in combat I’m a big man. Stroke. Stroke. Lrudlrick, "At least he didn't shoot him in the back."

Gun shot to the stomach. Knife to the neck. Jack is going special ops Splinter Cell on us. If 24: The Game is anything like this, I’d buy a Playstation to play it.

Robocop that was cold, running over your own henchmen.

Frickin' Weasel! Holy crap, the idiot is behind this plot! Now I’ve been played! Lrudlrick, "I guess he's not that stupid after all. The President is an evil genius. That is something."

I don't buy it. Sorry but two seasons of Goofus and we're supposed to believe that he's secretly Verbal Kint? He’s not that good. What's the agenda? What does he get for playing the ineffectual leader of the United States? Don’t get me started, folks. How far back does this go? Was he playing us since last season? Did he plan the death of the elected president? My vote is he’s longing for another long hard stroke of his ego. “I did it for the people. I’m a patriot, damnit!” Does FLOTUS know?

Maybe FLOTUS is having the worst day ever.

Heck, CTU employees are having the worst day ever.

Oh forget it, 24 viewers may be having the worst day ever.

What this season of 24 has taught me so far:
1. Idiots are in charge.
2. Always have a back up plan and a back up plan for a back up plan.
3. You can be blinded by patriotism.
4. You can be tortured by needle happy Burke but have perfect hair after an hour but stick my in the rain for ten minutes and I look like a wet cat.
5. If I had the option to go to CTU medical center or a Santerian Shaman in Nigeria, I’d choose the chicken bones and coconuts.
6. Jack uses some kick ass deodorant and must use Tide To Go on his clothing. The Lost people are on that island and after an hour they all look smelly and grimy. Jack’s been in tunnels, shoot outs and explosions and he doesn’t even have a 5 o’clock shadow. I say Degree should do a product tie in and make ‘Degree 24 – Protects men who take risks to protect you.’ 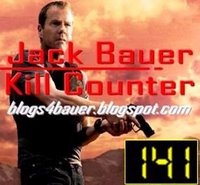