It's been a long week filled with pie. I did see 24 but I'm crashing from the sugar rush.

Check out fellow Jack fanatics at: 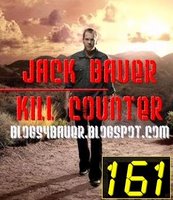 
1. I will say this, a Truman Show conglomerate of Bluetooth is lame. Having them be led by the kid from Fame is lamer.
2. Germans, The French and British diplomats on one plane and no snakes? Hope Jack makes it out of the luggage compartment better than my luggage.
3. Bill! Why'd you have go kill yourself. You could have taken a chopper with your bare hands. RIP. Say hi to Lispy for me.

Classic line of the day:
Tie between Bill Buchanan's response to being bossed around by Chloe and Mike Novack's 'It's been a strange day'.
Email ThisBlogThis!Share to TwitterShare to FacebookShare to Pinterest