Today’s episode is brought to you by Super 8 Motel. Super 8 Motel, endorsed by Jack Bauer. Next time, I’m staying at Super 8.

The following is realtime commentary on this week's episode:

What's up with the bun, Scarecrow? Seriously, every episode the costumers make you look older and older.

L: Slimey Miles has such as evil sounding voice.
Why is Smiley Miles all up in Scarecrow's bun? I used to think it was because he loved to smell the roses planted on Scarecrow’s butt but now I think he’s working with Weezie and Robocop. Never trust a pasty white wrinkly man in the government. This holds true in real life too or so it seems.

"It's a direct order from the president." Slimey, either you follow blindly or you’re blindly following. Either case, you’re following the wrong person. Lemming.

Apparently, it’s pasty hour at CTU/HS. I suppose the air quality isn’t the best right now in CTU and I haven’t seen anyone stop for a lunch or cigarette break yet. Do you think CTU hires caterers? It’s not like Lispy, RIP, skipped any meals. I’m surprised everyone at CTU/HS doesn’t have a peg tube installed to ‘increase productivity’.

People go home from CTU/HS? Really? Hey, CTU is a government organization. Do employees get overtime? Are they unionized? Work/Life Balance benefits must be non-existent.

L: How'd they find the bank manager without asking Chloe?
pg: They probably Googled him on the Treos.

Jack: “(Wayne) you should stay here if you're scared.” I'm not scared. I was a marine, damnit.

Jack is a prodigy, that's all I can think of. He knows how to do everything, except how to maintain personal relationships. Jack makes James Bond look like a pansy.

I've got to get me one of those Eddie Bauer/Jack Bauer edition man bags for my husband.

Bill, I love you so, I always will
I look at you and see the passion eyes of May. Oh, but am I ever gonna see my wedding day?

Audrey, I haven’t always been nice to you but tell me, where’d you get that snazzy jacket?

Weezie’s balls have descended in the last hour. I suppose I'm supposed to suspend my disbelief. Well enough has happened in my own life to believe a possible wolf in sheep’s clothing.

Aaron: “Is there anything I can do for you Jack?”
Jack: “No, but whatever you do, Pantrygirl wants you to make sure you stay alive."

L: Maybe Aaron is Jack's father.
I don’t care, I just hate when good people get hurt or die for silly reasons.

Miles has grown a fan/hate club that the writers have now given him a last name, Papazian. He must be happy. Miles is now 'Popozoa'.

Jack: “We will kill your wife.” I shot an innocent women in the thigh this morning. Don't mess with me. Unlike Robocop, obviously this man loves his wife.

Can someone tell me how and when did Evelyn have time to go to the safe deposit box while nursing crazy-not crazy-but-probably crazy FLOTUS?

Carl, you don’t want to know what’s going on because once you know, you're dead. Best if you keep quiet and just let Jack and Wayne (aka Bacardi and Kahlua, the best nickname by far) do their thing.

Jack: “Wayne.” Wayne, what the hell are you doing? Don’t you know you’ve doomed this guy to death now? Death by Robocop.

Speaking of dead. Good morning, Starshine.
Little girls, there is a lesson to all this. If you’ve just been kidnapped, a part of a shoot out and watched your mother get shot, don't call 911.
The award for best reaction during the 11pm hour goes to little Evelyn. Little girl, keep emoting and you can be the next Gwyneth “I named my baby a fruit and one of the most well known figures in biblical history” Paltrow. Anyone else wonder how much confidence these kids are going to need going through life named Apple and Moses? What expectations do you get when you hear Moses? How about Apple?

What’s Nice and Easy doing at CTU/HS? I thought they let everyone go except Chloe.

Law enforcement against rebel law enforcement. Hmm. Get your popcorn and Raisinets ready. We're getting front row seats to a LAPD vs. Robocop gang shoot out. Imagine driving past that scene.

L: I like the James Bond-esque music.
You’re right. It’s slightly hokey. Is this something new? I don’t recall ‘24’ having a soundtrack like this before.

Everything always happens in the server room. Server room = Trouble, with a capital 'T' and that rhymes with 'C' and that stands for 'Chloe'

Ok, the Cheesy James Bond music is getting annoying now.

And the award for best line during the 11pm hour goes to Chloe: "Are you kidding?" Priceless. Anyone else think that Women’s bathroom sign was inordinately large?

Ok, was the usual composer out on vacation or something? Who the hell ok'd the music?

Carl, it was nice knowing you. You’ll forever live in the Crewman Number Six Hall of Fame.

Jack: “Once we leave the bank, make a hard left.” No, Carl, you're other left.

See, I was minding my business walking to the local 7-Eleven when a convoy of tanks turned the corner and made their way into the strip mail where the local bank was. Holy cow! L: Great entrance.

Oooh, juicy tidbits revealed in this week’s teaser. Explosions. Bill Devane. Slimey Miles vs. Chloe. Nice and Easy playing nice and easy with Slimey Miles. Ooh, what I would pay to see Bill Devane beat the crap out of Weezie. 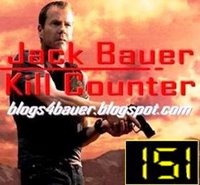