Midnight hour... The hour of droopy hair and bags under the eyes.

I’m off to do one of my 43 things. Sadly, it doesn’t involve winning the lottery. So my 24 rant this week is small. Here are a few thoughts about this week’s episode. All thoughts in real-time.

Oy, I really can’t look at Weezie anymore without laughing with disgust. He looks so much like a weasel I’m dealing with.

Does Jack drink coffee? It’s midnight and I have yet to see him eat anything. Maybe he has rations in his man purse.

For martial law there sure are a lot of people driving in the streets. Can you run reds during martial law?

Bill is like the dad who you run to when you really get into trouble. Picture him in a sweater vest with a pipe and a newspaper.

Audrey that is a snazzy coat. Please tell me I can find that at Burlington Coat Factory. I need a new fall coat.

Daddy Devane! Man, I have such a thing for old men. Aaron Pierce, Bill Devane, Bill Buchanan. Put a distinguished old man with gray temples in a tailored suit and you’ve got man meat for Pantrygirl.

Bill D., your security detail looks rather young and could use a few protein shakes. Bill, last year you had Jack Bauer. What happened?

Oil? Geez, I guess that’s what our interests were. Oil. I guess that makes sense. Personally, I spend a lot of time making sure oily build up doesn’t happen.

Bill D, throat hit to Jack! Holy crap. Forget Bill D as a possible dad. Imagine what he does when you get caught sneaking back into the house.

Ok, I still don’t understand why everyone was let go except Nice and Easy. You’d think with the sexual harassment claims, Miles would push for N&E to be let go with everyone else. By the way, anyone else notice how N&E’s hair is getting droopier and droopier?

“He’s the president. He can do what he wants.” Miles, that’s exactly the blind lemming attitude they want. Idjit.

Mike. Where the hell have you been? Napping?

What’s up with freaky doors? Everyone has these ugly ass geometric doors. The president’s compound is seriously in need of a makeover. The whole thing reeks Brady Bunch ranch home.

Mike’s no idiot. He’s gone behind people’s back for ‘the sake of our interests’. Man, Weezie is good at making lies up on the fly but their only going to go bite him in the ass in the long run. Pantrygirl will be there when it happens with a cold beer and a bowl of pretzels.

“Don’t you second guess me, damnit! I’m the President of the United States!” Dude, this isn’t a dictatorship.

Chloe, you can’t ration with Slimey Miles. Anyone else wish that Chloe was going to karate chop Miles? Man, Chloe could so take Miles in the ring.

Let’s see. Chloe can get dirt on anything and anyone. Chloe can also pick pocket. She’s learned to shoot a gun and has recently outrun a troop of men trying to kill her. Anyone else think Chloe should have been the daughter Jack didn’t have? Chloe and Jack should start a consulting business.

FLOTUS I will so not forgive you if you get Aaron into trouble.

Bill Devane, punch him. Give the president a karate chop to the neck! Do it! Do it! Damn.

The people who put you in office? What do you mean? You weren’t elected.

“How dare you judge me!” Weezie, we judge you because we can. If you were on Survivor, they wouldn’t just vote you out. They’d throw you into a snake infested pit.

“Your chair is not a thrown!” Damn, skippy! You tell him, Bill Devane!

Again with the cheesy James Bond music. I guess they paid a pretty penny for it.
I love it, Bill Buchanan’s home is now the new CTU.

Mmm. I love the smell of burning plastic and flesh at midnight and Jack comes away without a burn mark. I fry chicken and find a way to come out with a nasty burn mark.

Audrey, lift the damn arm and apply pressure. Don’t they make you take a First Aid class or something at DoD?

L: It goes to show you, sleeping with Jack isn’t going to end in something good.

Bill, I told you, you should have karate chopped Weezie when you could.

Audrey, doesn’t look good at all in the coming attractions. She looks like what a normal person would look after working over 17 hours without food and naps.


Check out other ‘24’ commentaries at: 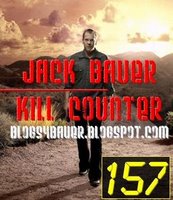