The Dark Side of the Pie

With my pie complete, the judging under way and the awards ceremony in the evening, we spent the rest of the day waiting and eating.

We first drove around and went to our first Super Wal-Mart. Unlike our Jersey Wal-Mart experience, this one looked like the Wal-Mart that we expected, huge and filled with everything under the sun.

I know this sounds weird to many but being New Yorkers, we really don’t have large super stores like Wal-Mart to frequent. Oddly enough we didn’t buy a thing there but we did hit every aisle. Thoroughly satisfied with our Wal-Mart experience we then went to submerse ourselves in all things pie. We did encounter a man entering Wal-Mart who felt compelled to pull his finger guns at us while driving a wood paneled mini van. Is that a common occurence? 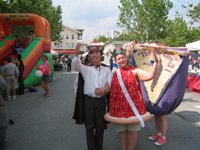 At the pie festival there was everything from jugglers and pie songsters to Lrudlrick’s favorite act, The Pie King and his court of pie. The Pie King was a teenaged boy dressed as a king of pie who told pie stories to kids and even taught them a pie dance.

L: I don’t know what it is but I like this kid. He gives it his all.

I wanted to take a picture with the Pillsbury dough boy but got caught up and lost my opportunity to tickle a larger than life size dough boy.

At the awards ceremony I met up with some of my fellow bakers. Lisa and her mom made it as well as Heidi who got 1hour of sleep. She baked 8 pies and looked happy and excited.

Heidi took two awards. The rest went to a mother daughter team that baked 28 pies, another woman who baked nearly 14, a woman who used to be a judge for the competition and the winner of best in show a few years bake. There were a handful that were first timers as well.

We all went back to claim our pies when pie became a bit more cutthroat. As we parked our car, a fellow baker ran to me to tell me that the person that one in my category and the person that one best in show were professionals and she was pretty irate about professionals in the amateur competition. I didn’t give it much thought but the ladies at the pie pick up all started saying the same thing and some produced business cards from the winner.

I really didn’t want to be catty so I went inside to get my pie and it got worse. Sadly, I was a bit upset that we couldn’t try any of our contestants pies. So I asked others if I could taste their pie. Soon everyone was trying each others pies. As we began tasting and exchanging information with each other a contestant came up to me and asked me to look out for one of her pies. Apparently it went missing. Soon other contestants were saying the same thing. A few minutes later, a male contestant said he found his pie in the trash. Apparently, someone was throwing out pies and stealing pie plates. Stealing pie plates! How petty is that!

Heidi pulled me aside and said that in other contests she’s entered people steal pies to decipher the recipe. “For a bloody pie?” “Yup, some people are that serious about these contests. Remember, you’ll get all kinds here. Many are friendly but there are some that you have to be careful for. You can tell by their reaction to you.”

You know, she’s right. I was having fun until it got a bit too serious. We left with some new contacts and a bit wiser about baking contests. I suppose there is a dark side and a light side to everything. In the end I met some fine people, got some great pie tips and hopefully will get my judging card in the mail soon. 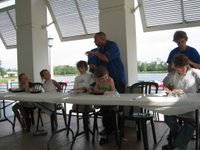 My favorite part of the day wasn’t the never ending pie buffet or even the award ceremony. 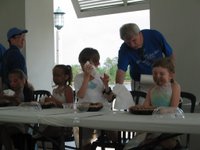 Hope they had a lot of wet naps. 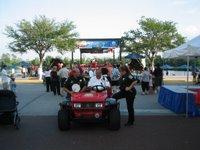 I was serious about the pie police.

Tomorrow: Why next time Pantrygirl will fork over the extra moola to fly Jet Blue.