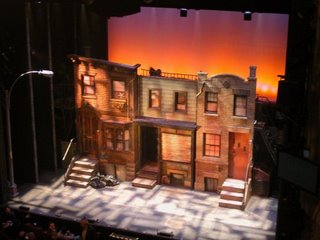 So I had a wrinkle in time last Sunday which caused us to miss the first half of Avenue Q. It was my brother’s birthday present and I folded space and time and wound up frantically packing chicken and fries into a bag. Long story that is embarrassingly inane.

So by the grace of the almighty Telecharge, we went last night. Now although I may be a Broadway fan and enjoy seeing musicals and plays, I hadn’t seen Avenue Q yet. First there was the hype. Then there was the price that went with the hype. Avenue Q would have been perfect if it stayed as an off-Broadway show but I guess you can’t charge the prices they charge on Broadway. However, I was curious to check it out and my brother’s enthusiasm pushed me to finally see it.

I’m not going to give a review. I will say that my husband was in tears at some of the songs. He truly enjoyed himself, which says something since he's a non-musical loving guy.

This show is truly not for kids and I find it odd that on occasion I see ‘special’ performance nights where they purposely say that the material is not intended for children. If a regular night was like last night, I don’t know where else they could possibly go to push the envelope of decency.

Anyway, great show. Incredible performances from many of the actors who played multiple roles.

And aside from my brother with his Herculean strength ripping an arm rest out of it’s socket, the laughs were all for the performances on stage.

Oh, one note, a 15 minute intermission is not long enough for a woman to go to the bathroom. By the time we made our way to the restrooms located on the bottom floor, the women’s line was serpentine. It snaked it’s way around to the other side of the bar, which by the way is something a woman does not want to see when she’s holding a full tank of gas.

Either add more stalls or let us use the men’s room. 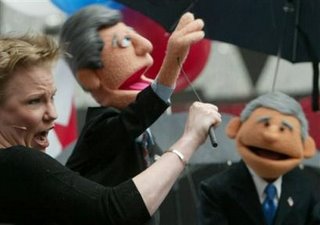 Oh, this was from a 2004 debate the cast held. It wasn't part of the show but it was aired on television.