No, I didn't beat my husband up to get him to marry me. 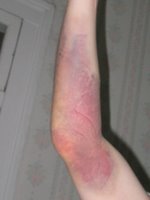 Some people have asked me so I’m going to explain the image of my husband’s forearm in the collage photo.

We flew down to Louisiana a few days before our parents and friends arrived to assure our plans were going as scheduled. We also figured we could take in a bit of the city before the craziness of the event took hold.

We took in a few parades and had a great time chatting it up with locals on things to do. The one thing that surprised us was the freedom to drink on the street in Louisiana. In New York City drinking in public is a no-no. You can’t even have an opened container of alcohol in your car. So we freely enjoyed a glass of spirit or two while watching the parades.

Now what they don’t tell you but I’m going to is that the first weeks of Mardi Gras are fairly tame and quiet. If quiet means you can walk down a city street without pushing your way through. Therefore local hotels, bars and restaurants are fairly lax about letting you use their facilities.

However, the last weekend before the actual Mardi Gras day, everyone locks down entry so you need to be a patron to use their public bathroom. This goes for every hotel, every bar and every restaurant. This includes Burger King and Wendy’s. BTW, all fast food chains close their bathrooms to the public and patrons during this weekend. We learned this the hard way.

So the rule of thumb is if you have a weak bladder, get a hotel room within the major parade routes you plan to see. You’ll get a wrist band that will allow entry back into the hotel.

Our place was not within the major routes. We figured we’d want a quiet place to relax after the hectic to-dos of Mardi Gras and our wedding. Our friends and family hadn’t arrived yet either so we couldn’t sneak into their hotel rooms to tinkle. So we did what we had to do. We ordered a small item at a bar and used their facilities. Think. What small item could be ordered at a bar that can be consumed rather quickly?

Long story short, the night before our parents arrived, we got completely trashed. It wasn’t purposely done but nevertheless, we were hammered. Oh I have to also admit that I was a bit upset that night because during one of these pee-breaks, I asked Lrudlrick to hold my bag which contained the photos of our grandparents that we planned to display on the tea ceremony table during our wedding. Well, Lrudlrick wound up making friends with some guys from Upstate New York and left my bag on the street.

I thought our original photos would be lost forever. A week later, a good Samaritan mailed us the photos she found on the street. There are good people in the world, I tell you.

So I was a bit upset so I may have imbibed a bit more as well. Somehow or another we made it back to our bed and breakfast. Lrudlrick dragged me face first up to our second floor room and threw me on the bed. Bored, Lrudlrick decided to surprise me by returning home with more beads for me. At this point Lrudlrick should have remembered the golden rule about drinking, always stick together. Lrudlrick’s side: I forgot the golden rule but if you had reserved a room with a television, this would not have happened.

So Lrudlrick left at 3-4am to find beads. From this point on, I can only report to you what I was told by Lrudlrick. Remember, I was at this time I was drooling on my pillow.

Lesson #1: Judgment is severely impaired when you are inebriated.
Lrudlrick spent the night walking the streets of the French Quarters and stopped by what he later described to be a balcony covered in beads. Every balcony in Louisiana is covered in beads during Mardi Gras.

Lesson #2: Alcohol makes you forget hold old you really are.
Apparently there was a particularly shiny set of beads that attracted his attention. He said there was a tree within distance to the balcony and thought he could climb the tree and swing over to the balcony to get the pretty beads.

Lesson #3: Alcohol wrecks havoc on your ability to determine spatial relations.
So he attempted to do a George of the Jungle and at some point while in the tree, while swinging is our guesstimate, he fell. He fell right into the private property of the house he tried to climb.

He must have been very high because the force of his fall caused a car alarm to go off. Lrudlrick later said the force knocked the wind out of him. The car alarm and the imminent danger of being caught by the cops woke Lrudlrick up. Flight or fright kicked in.

I’m going to stop and explain what facilitated his urgency to escape. See, during Mardi Gras, if you do anything remotely illegal or questionable, you are detained until Ash Wednesday, the day after Mardi Gras. There is a no tolerance law in effect during this time to keep everyone safe during the festivities. I’m sure that Lrudlrick feared having to explain to his parents, his fiancée and his friends the reason he missed our wedding was because of some shiny $.99 beads.

So Lrudlrick decided to run as far away as he possibly could from the scene of the mishap. For some reason that I don’t understand Lrudlrick said the only logical thing to do was not to jump the fence back out of the private property but to run further into the private property. He said it had to deal with cops checking the front perimeter first. Lrudlrick explained this as a fact that you learn growing up in the Bronx but I think this is a bit of hooey. Every time I see a snippet of ‘Cops’ the perpetrator is caught in someone’s backyard in a bush.

So he ran through into the backyard and ran smack into a brick wall. Obviously influenced by Jackie Chan, Lrudlrick decides if he runs fast enough he can scale this wall. According to Lrudlrick this wall was also on an incline so it took about 3 tries before he managed to scale the wall and make it over.

Dazed, confused and pumped with adrenaline, he hobbled home. He peeled off the bloody, dirty clothes and decided to shower and go to bed. Realizing that his parents only had his cell phone number as a contact in NOLA, he decided to charge his phone. When he reached into his pants pocket to find his brand spanking new cell phone, he had the sickening idea that he may have lost his cell phone in the private property he fell into. 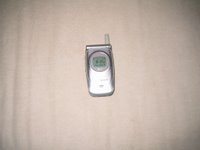 Sure enough his phone was gone. What if the cell phone is in the property? If the cops find it, they can trace it back . What if the cops show up during our wedding to arrest me? How can this be explained to our parents?Obviously, Lrudlrick and I would be lousy criminals.

Lrudlrick decided he needed to go back to the scene and find his phone. At 5am, he changed clothes and hobbled back onto the street with my cell phone in hand hoping he would be able to hear his phone ringing.

I’m not sure if it was a possible concussion or Lrudlrick’s poor navigational skills but he couldn’t find the house with the balcony filled with shiny beads.

He returned home battered, bruised and defeated. At this time, I woke up with a vicious hang over to find my then fiancé a bloody mess. Groggily he grumbled a terse explanation involving lack of entertainment, trees and phones and passed out.

I spent the rest of the morning nursing a hangover and hoping that my husband didn't have a concussion. Lrudlrick spent the afternoon traveling to Verizon stores throughout the area to pick up a new phone. We also fielded calls between our parents and thought it wise to allow us one day of recuperation before meeting with them.

The photo in the collage is of his forearm the day after our wedding. Photos cannot show how gruesome his arm looked. It was swollen with fluid and went from shades of vamp black to burnt sienna yellow. He couldn’t lift it too high and bending it was painful. We went to his doctor when we returned and he said that nothing was damaged and that he was lucky he didn’t break his arm.

By the way, my husband wasn’t the only one with bruises on our wedding day. The day before my brother landed on my forehead while attempting to catch beads. Mind you this isn’t the first time my brother left a welt on my forehead but that’s a story for another day. It left a giant welt on my left side of my forehead that turned greenish black. I swear the make up artist must have thought Lrudlrick was beating me.

On our wedding day, we privately joked that we had to be beaten up to get us to walk down the aisle.

So that's the story of my husband's bruised arm and how you should never think doing shots to use a bathroom is a smart idea.