Internal Memo: CTU Corporate Retreat to Disneyland has been cancelled.

The Nose is the Mole?
If Audrey is the mole, my dog is an Interpol operative.

I don’t believe it. What does she get out of it? She doesn’t need money. Her dad is the Director of the DOD. Daddy got her the job in DOD and she’s pretty much set for life.

I don’t believe for one minute that she’s doing it for patriotic or avengence reasons either. That's too manipulative for her. The only reason Audrey would do something wholeheartedly is for the love of Jack but in a White Oleander kind of way.

And then there’s the fact that she doesn’t have the versatility to play a bad guy. She’s constantly the injured woman. She’s a walking Lifetime movie, ‘Why Do Men Leave Me?: The Audrey Raines Story’.

Sure, the rule stands, never trust a woman who can’t run in high heels or doesn’t have logic skills to take off said shoes to bust a move with her karate chopping dad but there’s no justification for making her the mole, except to enforce the women-are-evil sentiments. Jack, when this is over, go back to the red headed girl and her smells-like-teen-spirit son. You'll be happier.

Still, if I was in CTU, I’d ask to administer the hyocene pentothal to Audrey. Aw, heck, tell Burke to pull out the sensory deprivation devices for old time sake.

Anyone else think Burke gets a little freaky in the bedroom? I wouldn't be surprised to see Burke visiting Lady Heather for a little slap and tickle.

Mmmm. Eurotrash.
He’s not my type but Eurotrash German dude is hot. Did I mention that he is hot? I think I just got the vapors.

A self-destructing SD card? Now that’s technology I want to see James Bond have. Although I heard Q may not have a significant role in Casino Royale.

Jack, pissing off German Intelligence isn’t a good move, especially since the Chinese are probably still after you but I must say that was a nice hand played. I loved the added bonus of Homeland Security moppet, Karen Hayes, shitting a brick about the WET list.

BTW, what the hell is wrong with her hair? Is that really her hair? It looks like wet straw?

Taking it on the chin. This man needs to write a self-help book.
Other leaders would question their authority but Buchanan is just rolling with the punches. The White House keeps bringing in incompetent people to usurp his department and he’s still standing strong. First The Hobbit. Now The Scarecrow Mrs. King. The man must be listening to Stuart Smalley.

BOB isn't going to take the fall for this, no siree.
Damn you Leland, you make all Vice Presidents look bad on 24. I wanted to think you were just a Mussolini or had a Napoleon complex but you're just another power hungry politician who wants the spotlight and the glory. Wait a minute... And yes, you will always be Leland to me, you possessed daughter rapist/killer.

I don’t know how President Weezie picked his cabinet. Did he decide keeping his enemies closer might be the best route?

And the Employee of the Month award goes to...
Aaron, you single-handedly saved the First Lady and the President and First Lady of Russia. You were in an ambush that caused the vehicle you were in to roll over. You were also shot at. I think the Secret Service would be ok if you took the rest of the day off. Somehow or another you get yourself into a pickle next week because you didn’t want to blemish your attendance record.

I have one thing to say to the ‘24’ writers, if you kill Aaron, you will see more hate mail arrive than when you killed Edgar PuffnStuff. Don’t kill Aaron! Let the man retire and live the rest of his days with his wife and kids for gosh sake.

He ain't heavy. He's my deceased ex-employer's brother...
There are some people that arrive on the scene and you know trouble and death are ahead. Cougarbait is one. Wayne Palmer is another. The man just seems to swim in trouble. Did he think he could slip into the Brady Bunch ranch hut that the President is staying at without being stopped?

And I’m not a super spy but if a van with black hooded, machine gun toting men drove up to me, I’d pull my parking brake and do a donut and drive the other way. I’ve been playing too much Burnout Revenge. I’d also have my cellphone speed dial to Jack so he can hear what’s going on.

Does anyone remember what Palmer had encrypted into his memoir? Who decrypted it? Chloe has been too busy assisting Jack that she hasn’t had the time to work on it.

Snark wars: Chloe vs. Miles. Let the Sourpusses commence.
Props go to the actor who plays, Miles the Smiles. From the moment I saw you, I hated you. Well done. That smirk you made when Chloe was reprimanded not held on espionage but given a slap on the wrist for hacking into NSA’a archives was classic. I hate you so much I smile in Grinch delight. Here’s hoping Chloe bitch slaps you soon.

At least Warlock was playing on cable last night.
Bierko. Poor Bierko. You and I have been led to believe you were the uber-bad guy but Robocop trumps Warlock. Here’s to another episode where airtime for your giant schnoz was less than 15 minutes. If Audrey is dirty, maybe you and her can spawn little uber-Pinocchios and live out your life in some Russian province where everyone speaks with a British accent.

Check out other ‘24’ commentaries at : 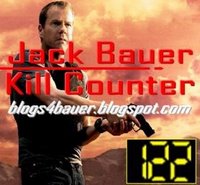