Yet with all these gadgets notice the big red notepad I still walk around with.

Happy day after chocolate high, everyone! I hope everyone got lucky.

I’m not a huge Valentine’s Day fan. I buy a card and a small gift and that’s the extent of effort I put out. Then again, I’m a girl so the expectation for an extravagant to do is low. I know this is stereotypical and wrong but one cannot deny the fact that the onus to produce something romantic ong V-day lies with the Y chromosome set.

For me, my anniversary holds much more weight in the romance area than a retail industry holiday. Still every year, I go out to Hallmark and peruse the aisles of pink and red sappy, sentimental and humorous cards hunting for the perfect expression of love that a stranger can write to my love.

This year as in most years I chose a humorous card. It was a cereal box card, a 3 dimensional card that is made to look like a cereal box. It had a Happy Tree Friend like character on the cover and it was called Smoochies. I filled it with homemade chocolate raspberry truffles and presented it to him with a huge steak, eggs and hash brown breakfast.

Lrudlrick presented me with a cute card, a reference book on cakes and pies and an iPod Nano. Yes, folks, Ms. Techno Geek has now entered into the iPod owners’ association. Out of all the new toys and gadgets out there, the iPod was one of those items I could have skipped the bandwagon on. It’s not that I dislike them. I’ve listened to my husbands and find them entertaining. It’s not that I dislike Apple. I have nothing against Apple, U2 and Steve Jobs. I just never had a need for one. Sure an iPod on the train would be nice and would aid in the New York City subway tradition of pretending the person leaning against you doesn’t exist but I’ve done well with reading my newspapers, books and magazines. I’d say it would be great at the gym but I haven’t stepped into a gym since college. 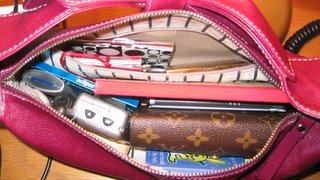 Here is my purse with the standard contents, except for the camera I used to take this photo. The electronic contents include: A flash drive with an extra SD card, a flashlight (you never know when you’ll need it), my cell phone, my pda and my camera which isn’t pictured. On the days I need a cable to connect one of these bad boys to my non-Blue Tooth enabled work pc, I have a mish mash of cables I carry in my work bag which has on more than one occasion lent to some strange glances from fellow commuters.

Now you can understand why I didn’t jump on the iPod bandwagon. Yet when I unwrapped my present I was like a kid who just unwrapped her first bike. I was jumping up and down like a school girl and began comparing it to my business card holder. Did you know it’s smaller than an average business card holder?

I haven’t programmed it yet but I plan to tonight. I’ve named it Mork and am compiling a list in my head of what songs to load first. What was the first set list you loaded onto your iPod?
Email ThisBlogThis!Share to TwitterShare to FacebookShare to Pinterest