Out of the old and in with the new...

Thanks for the advice and congrats on the iPod, folks. I spent all evening programming it. Like most of you, I loaded The Killers right away. My first purchases were singles from Weezer and Franz Ferdinand. I’m still trying to figure out how to organize everything. My OCD is pumped. So far, I’ve categorized my music into sub genres. Nothing seems pure. I have Rock/Pop, Rock/Classic, Rock/Folk and it continues all the way down from Funk to Rap. Which begs me to ask, what’s the difference between Hip Hop and Rap? Honestly, isn’t it the same? I finally decided that Jay Z was Hip-Hop and Tribe Called Quest was Rap/Jazz.

Lrudlrick is now complaining his iPod is too big. I offered to swap but I think he just wants an excuse for a new toy. Mork saw his first glimpse of the outside today. It was actually nice to have a soundtrack for the morning that wasn’t programmed by my head. Usually my morning soundtracks contain snippets of songs that pop out from the crevices of my brain. Today, Mork provided some Beatles, Blackbyrds, Ella and De La Soul. Very nice. Very nice.

I also like the music quiz that you can play. I have my own Name That Tune in my pocket.

I am afraid of it may break though. It’s so thin and tiny. I’m being very ginger with it. I’m also on my way to consolidating all my electronic gizmos. My cell phone contract ends on March 2nd so I’ve decided to get one of those new fangled all-in-one doodads. If all goes well, this will be my new phone/PDA/camera: 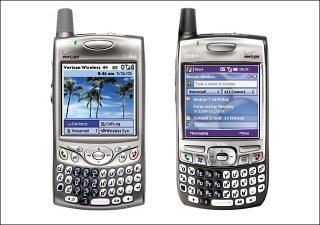 I’m not sure how much I’ll like it. The buttons and the chunkiness are my biggest gripes but everyone in my office uses it and loves it. I figure by the time I hit 40, there should be an all in one implantable chip freeing my purse for more important things like lotion and tic tacs.
Email ThisBlogThis!Share to TwitterShare to FacebookShare to Pinterest