Lrudlrick and I attended the last day of the Westminster Dog Show. Many of you know that I’m a huge proponent for the adoption of shelter and animal rescue dogs so our attendance may shock you. Because I myself prefer to spring pooches out of dog jail doesn’t mean I don’t’ appreciate the pure bred brethren. Besides I wanted to check off Westminster from my list of NY annual events to attend.

Figuring dragging Lrudlrick around to a dog show for more than a day would be too much for him, I purchased a day ticket to give us a taste of the ‘Hi-Life’ doggie style. Attending the dog show was actually a lot of fun. First, during the Best of Bred competitions, you can be on the floor to view the judging. The floor is transformed into smaller rings. You can meander through the aisles to check out each area. Mind you, it does get crowded and I highly suggest wearing layers because the heat can make you feel like you’re wearing 3 layers of fur.

I strongly suggest that you do spend time on the floor versus sitting in the audience. Although crowded, no one ever pushes and unlike the Macy’s Thanksgiving Day parade you will find pockets to slide into to get a great view. The added bonus is mingling and eavesdropping on conversations from breeders and owners. If you go, I suggest you print out the judging schedule and map out which BoBs you want to check out and get there early.

The next best thing about the WDS is that you are allowed to go to the benching areas to check out the dogs. You can talk to the handlers and care givers as well as pet the pooches. Now if you thought the benching areas would be as presentable as the benching areas in Christopher Guest’s Best in Show, you’re wrong. Sure, comparing the actual backstage to a movie set is bound to disappoint but that was the only reference I had folks.

First there is the smell. Sure these pooches are pampered but as Taro Gomi has thoughtfully taught our children, Everyone Poops. So periodically throughout the benching area there are areas where large walk in boxes of sawdust are available for dogs to do their business.

The smell is less like zoo or cat litter box. I can only say that I couldn’t help but squinch whenever walking by these areas. Apparently, these pooches have a lot to say to each other. I do want to point out I found it disturbing that the American Handlers Association’s kiosk was stationed within 3 feet of the larger potty pen areas. 3 well dressed men and women sat there manning their kiosks with stoic faces. If this was my job, I’m not sure I could have mustered the strength to sit there and endure the pungent aroma for the entire duration of the show.

Once you past the pee pens, you’re left with kiosks on the outer perimeter of the benching area, the prepping stations and the actual cubbies where the pooches wait. There was a plethora of merchandise kiosks that sold jewelry. I never knew there was such a large market for jewelry for not only humans but also canines. Another kiosk also sold those AKC approved dog wrist watches where the image of your favorite breed displays the time. It’s half past my Jack Russell’s tail.

Pedigree’s kiosk was by far the largest and the most crowded because of their goodie bags. Their goodie bags contained sample packs of their kibble. Since our pooches have hit senior status and require kibble chocked full of Glucosamine goodness, we didn’t take our goodie bag and left it for someone else to have.

The grooming stations are just like the stations you see at Petco except these dogs are so immune to it, they enjoy the poking and prodding. The benching stations can become crowded but each aisle is clearly marked overhead like a supermarket aisle. Each breed is kept together. Most of the cubbies are packed with crates, treats, fans and goodies for the pooches. Some dogs had blankets to cover them from view which was a little disappointing. Others had full glossy photo displays of the various awards or lineage.

What was surprising was the amount of food clearly out and available to most pooches. Unlike supermodels, these pooches eat and so do their handlers. A few steps away from the Dachshund benching area, a MSG kiosk was selling hot dogs. Somehow, this just didn’t seem right to me.

Overall, everyone from the attendees to the owners, handlers and breeders were friendly and nice. Lrudlrick does point out that although the Westminster Dog Show is technically a men’s club, the fans and participants are mainly women, middle aged women of society.

The amount of old money bling this one elderly woman wore was so fascinating, I couldn’t help but stare at her as she held a conversation with her handler. It made me feel a little shabby un-chic in my Gap turtle neck and snow boots. Still, if you go, dress for comfort. You will be mingling a lot in a crowded, warm environment.

We returned later in the evening for Best in Group and Show a little shabbier chic, even though we were nearly seated by the Owners box. To give you an idea of how high we were, if you watched the show on USA, the camera they used for the overhead shot was one chair away from me. Lrudlrick kept praying it would hit us.

If you go to Best in Show and you purchase the General Admission seats, bring your binoculars. We couldn’t get a nice shot from where we sat so check out the AP photos or check out ThePoop.com. However, I will share with you two of our photos. 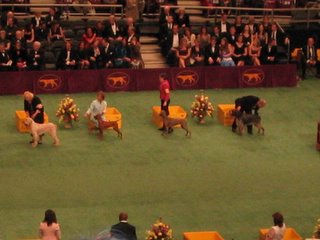 This is the Weimarner (second from the right) that I picked to be Best of Breed. Lrudlrick kept screaming for ‘his busy bee’. 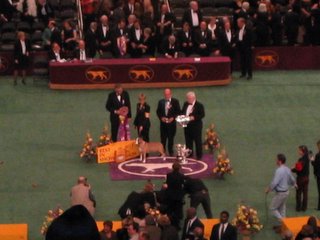 This is Rufus, the Best in Show and my favorite in personality amongst the finalists. I’m not a bull terrier fan but his personality was the best by far.


By attending the Westminster Dog Show, I learned the judging is all subjective and of the moment. A pooch just like a Broadway actor has his good nights and bad nights. Lrudlrick and I loved Shaka, the Rottweiler, the first night of competition but on the second night he seemed a bit distracted.

In addition, I learned that there are some real dirty jobs a handler must do. Mike Rowe should spend a day with them. Apparently, pocketing kibble in your mouth during the showing of the dog is common practice amongst seasoned professionals. I don’t know about you but I can’t pocket liver in my mouth for myself let alone for a dog. Also, dogs that don’t expel prior to show are ‘coerced’ by means that will only be described here as intrusive.

If you thought hockey fans were rowdy, you should check out Dog show fans. The screams and hollering during the show are incredible. I was surprised the wave or an air horn wasn’t blasted during the game. One group of Golden Retriever fans was so exuberant, I was waiting for them to take their tops off and display painted bellies spelling ‘Goldie’.

I definitely suggest you check it out next year. Wear comfortable clothes. Pack drinks and munchies in your backpack. Bring your binoculars and zoom lens camera. See how well you fair with the judges opinions.
Email ThisBlogThis!Share to TwitterShare to FacebookShare to Pinterest