The streamers are still up and I don't plan to pull them down any time soon.

I’m a little sad my birthday week is over. Honestly, I think I’m sadder that my time off of work is over.

Lrudlrick, Dave, Judy and I got together Wednesday night to watch a taping of The Colbert Report. I thought we were up close and personal during The Daily Show taping. I was wrong. We were so close that we had to move out of the camera guy’s path. I would have taken a photo but they were pretty strict about no photography.

Stephen Colbert was still honing in on his new status as anchor and star and it was interesting to see the entire process on their 3rd night of taping. Dave jokingly said the guest was going to be Cameron Diaz. Thankfully it was someone interesting. Fareed Zakaria, editor of Newsweek, was the guest.

For those interested, the format for the taping was similar to TDS except it took longer because they were still working on the rhythm. I believe the guests are still trying to grasp what the format is. Is it punditry? Is it satire? A few guests I've seen so far have slowly acclimated to it. Others left as confused as they were when their publicist booked them.

Mr. Colbert answered many questions, most on outside projects like Strangers with Candy. I wanted to ask about marketing a God machine but of course I was placed in a catatonic state by the warm up comedian, who Judy swears was some guy pulled off the street. The poor soul practically asked every audience member where they were from. Here's a tip Mr. Poor Soul, topical references. Read a newspaper in the morning.

After the taping Lrudlrick took me to Morton’s for a delicious steak dinner. The man knows the way to my heart involves big hunking slabs of beef. I would have ordered dessert but I was completely pie-d out. For anyone who hasn't been to Morton's, their desserts are huge and require at least 45 minutes to make so you need to order them when you order your main course. And yes, the hot chocolate cake is orgasmic.

What I still marvel at is the right to have a gigantic 3D video box cover of Jenna Jameson barely dressed advertising across the street from the Hershey’s store. Aren’t there regulations about X-rated material being near kid friendly stores? Apparently no one seemed to care but me.

The rest of the week was spent browsing at kitchen appliance shops, making more pies then I care to admit, watching my band of the moment, Franz Ferdinand, on SNL and taking Z-girl to the vet. All in all, it was a great time off. If you don’t count the hour and a half spent at the vet.

BTW, was I the only one that fast forwarded every skit on SNL this weekend?

Oh, and I got an awesome birthday present from Lrudlrick. No, it wasn’t shoes.

Say hello to the most kick ass knife I’ve ever had in my entire life and that includes several Chinese cleavers: 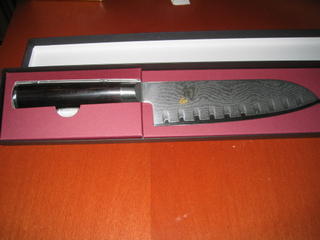 Apparently the sales lady seemed mighty impressed Lrudlrick was purchasing such a finely crafted utensil for his lady friend. Lrudlrick told me she said, I'd be very happy. She was right. As an aside, lady, if you had any thoughts of stealing my finicky eating, shoe and handbag buying husband, remember who has the steel made from Japanese bladesmiths whose ancestors were probably schooled in samurai sword making.

Lrudlrick kicks butt when it comes to knowing what I want. Thank you, hon. That was an awesome gift and no, I do not plan to make you into carpaccio. If I could, I’d carry this knife with me just to show it off. Of course, bag checks on the subway would be interesting.

We may be heading to a costume party on Friday, depending on if I can get my pie baked in time. Any suggestions for a Halloween costume for either myself or Lrudlrick?
Email ThisBlogThis!Share to TwitterShare to FacebookShare to Pinterest