"It's very human." -- Cameron Diaz on In Her Shoes

After a year and a half of trying we finally got to see a taping of The Daily Show with Jon Stewart last night. I had a great time. The studio is much smaller than Letterman’s so you really feel a part of the show. This is odd since TDS is one of the few shows where the audience is never seen.

Even with Graham Norton’s show, where audience participation is a must, we did not feel as integral. I suppose it’s because Mr. Stewart is a comedian and looks for the audience reactions with each report.

I use the proper Mr. Stewart because Jon seems as if I know him personally. Although, when I was a teen, I did deliver his medications from the local pharmacy but it’s not like that constitutes an acquaintanceship of some sort. Plus it's not like he would remember me. “Hey, weren’t you the kid that delivered the anti-itch cream?” Just in case Mr. Stewart’s representatives read this, I am not implying Mr. Stewart had some condition that required anti-itch medication. In fact, he looked healthy, was quite courteous and a nice tipper.

The one thing I did like was how Mr. Stewart came out after the warm up to take questions. He interacted with us without playing to us.

I would have loved to see ‘This Week in God’ live but alas, we only saw a segment from a new correspondent, Nate Corrdry, younger brother I suspect of Charlie Brown impressionist, Rob Corrdry. The segment was actually quite funny and he came out later during the break for some applause. Rob was there too with his shiny dome.

I suppose after waiting a year and a half for tickets I shouldn’t complain but I was really hoping for a political figure as a guest. Instead I got Cameron Diaz. No offense to those who love her but she’s just a but too ditzy for me to stomach. During the taping, Judy mentioned that she’s the highest paid actress in Hollywood. If that’s true, it’s mind blowing. Yes, I loved There is Something About Mary but really, the highest paid actress? She’s not Oscar caliber material, if you know what I mean.

Well, during her interview she was pushing her new film, In Her Shoes. I can’t say she persuaded me to spend my $10+ incidentals for concessions. If she said the film was ‘human’ one more time, I think I would have snorted loudly into the overhead mic. I was polite though.

It did lead to a discussion last night between Lrudlrick and myself. Who is prettier, Uma or Cameron? Personally, I find neither drop dead gorgeous but if my husband had to choose, he’d choose Cameron. Sadly, I’d probably go solo. I’m just not crazy for either two.

Personally, my favorite body type of the current Hollywood elite is Salma Hayek. She’s curvy where you should be curvy. She dresses appropriately and hell, she has a rack that is incredible.

Maybe I’m not into blondes although I did find Tara Reid in Josie and the Pussycats cute in a bring-a-stray-home-and-take-care-of-them kind of way. Nowadays, Tara looks like she’s taking classes in Courtney Love’s beauty school.

Anyway, they wouldn’t let you take pictures during taping and darned if Lrudlrick didn’t start a fight with the stage assistant for running up to the desk but here’s a shot from when they herded us out like cattle: 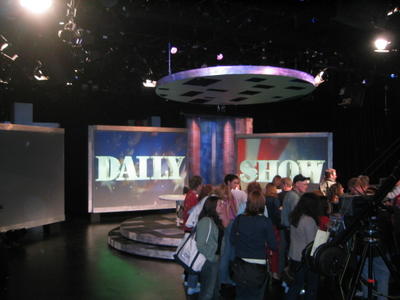