Iron Chef New York: I am Pie or how I'm blowing a local pie contest way out of proportion

It’s Autumn and Autumn means one thing to Pantrygirl, cooking. Ok, every season equals cooking for me but in the Fall I like to work on stews and baked goods.

I spent Sunday making cherry pies, actually perfecting cherry pies. This was not an easy feat as the humid weather was wreaking havoc with my flaky crust.

Lrudlrick’s office has been keen on me entering some pie contest. With a finicky eater for a husband I'm grateful to have a few who are eager to be my personal guinea pigs.

Matt’s been asking for cherry pie but if I’m going to enter a pie contest I want in-season ingredients so cherry is out. But I felt I should at least work on an out of season cherry pie. So after a few trials and errors, I think I’ve made a decent cherry pie.

Here is a photo: 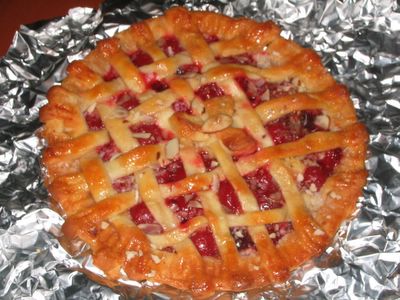 I’ve never entered a pie contest before. What are the rules? All I’ve been told is to bring a pie. Does that mean it can be any kind of pie? Now, the contest isn’t a money contest so I suppose that’s why there really aren’t any rules but inquiring minds want to know.

I don’t want to show up with a mincemeat pie and find out everyone has made rhubarb pie. Does everything have to be from scratch? Will we be marked for presentation? Will they have warm plates to keep warm pies warm? Are there any allergies? What if I make a pecan and the judge blows up like a blowfish? Who judges? What makes a person eligible for judging? Are any of them on the take? Is there nepotism in this competition?

Ok, clearly, I’m watching too much Iron Chef and I’m taking a pie contest to a totally different realm. I’m just a city girl who has no idea what a pie contest is except for what she sees on Food Network and one episode of Monk where some old granny got shot for a raffled pie.

Tonight, I’m going to play with a crumb crust. If the weather is as humid as it is today on the day of the contest, I may be better off with a crumb crust versus a dough crust.
Email ThisBlogThis!Share to TwitterShare to FacebookShare to Pinterest