1. I’m naturally inclined towards male friends than female friends.
I’ve always been girly on the outside but tomboy on the inside. Hence it’s led to a lot of internal struggles. I’d go into to detail but my male side says to move on.
2. I have lip balm and lotion stashed in nearly every room in my apartment.
This is partly because of an addiction, partly due to my laziness. I live in a one bedroom apartment but find walking over to the bedroom for my Burt Bee’s is too much physical exertion especially after I’ve hunkered down into my couch and made a mini-fort with my pillows.
3. I’ve punted my girl dog more than I can count.
I love Z-girl. It’s just that she’s always in the way.
She has a tendency to lie by your feet so when you decide to get up from the desk, table or couch, she nearly gets stomped on. She also overreacts and does this Scooby doo thing with her feet and cowers to the side.
When you do remember to check before you step down, she isn’t there but where ever you want to go Z-girl is already there. Want to go to bed, guess who is already in my spot? Want to sit on the couch, guess who has to be moved? So when you want to walk down the hallway, you better make sure you look less you punt her accidentally. Lrudlrick thinks Z-girl can see the future. “Where you are thinking about going, she is already there.”
4. I've mistaken my dog for a pillow.
This was pre-lasik days. Sorry P-man.
5. I hate when people lean over me and get there hot nose breath on me.
I'm a petite woman. On the train, I expect people to hover over me. I don't expect them to hover over me on line waiting to buy movie tickets. Nor do I expect them to hover over me at the museum. Here is another tip, Mr. Towers, since your mouth is fairly close to my ear, I hear everything you say as if it was spoken through a megaphone. If it isn't bad enough I have to hear you 'hmmmpfff' through your noise, you've got to discuss meeting a friend by the Picasso hovering over me. Be respectful of personal space.
6. I really love chocolate snaps.
When I was a kid I used to save my money to buy these things: 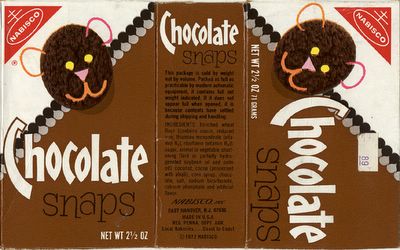