If I'm Thelma and You're Louise, where's Brad Pitt?

Wow! What can I say but thanks to Michele and Indigo for the Site of the Day honor. Greetings and salutations to all who have visited and left warm greetings this past weekend. I came back from my RnR to a mailbox full of goodies.

I invite everyone to check each other out, especially Michele and Indigo. Welcome and I’ll do my best to visit you all as well during the coming weeks.

Well, as Indigo has mentioned, I was on a ladies only retreat for some much needed RnR. My cousin, Judy and I went to the Berkshires for the weekend to a Yoga retreat center called Kripalu.

Now, I’m not a Yogi nor am I a back with nature type of person. I’m more of a city girl but I’m not adverse to trying different things, especially when it involves food. Plus, any excuse to stay by a body of water is ok by me. Now, I know this doesn’t make sense coming from a girl who lives in an island but trust me, there is a big difference between The Harlem river, The Hudson river and just about any other water mass out there. Sure, they offer kayaking on the Hudson but I am not volunteering to marinate in the goo that is the Hudson river.

So on Thursday, Judy and I met at my apartment and with our backpacks filled with nothing but comfy clothes, our bathing suits, basic toiletries and a bottle of water, we packed ourselves into C4 and took the Taconic straight into Massachusetts.

We left the boys home. Apparently they had plans to hang out on Saturday. Judy and I placed bets on whether these plans would come to fruition or if they’d just stay home with there Xboxes, computers and televisions. The only thing I knew for certain about the boys being left alone was that by the time I returned, I’d have a new electronic device in the house. Say hello to our new television. 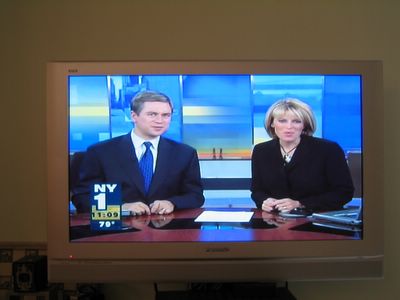 When the cat's away, the mice buy new toys.

I’ve learned one thing about road trips with women; there is no shortage of food. The drive takes less than 3 hours and yet collectively we had purchased: two bags of chips, a ton of fruit, hummus, spicy horseradish dip and crudités. Did I mention we had fresh blueberry waffles and coffee before we left the apartment?

The ride was perfect thanks to Judy’s idea to leave on Thursday morning to avoid the weekend rush out of the city. The Berkshires is quaint. It’s what upstate New York should be. Upstate New York just looks depilated and uncared for. Sure there are beautiful parts but there are also many towns left nearly abandoned.

The mills have all been converted to other businesses but the architecture remains the same. It’s rather nice to see that old time charm retained.

“I’ve been hanging out with my husband too much.”
Wherever you go though, I highly recommend getting away from your spouses for a day or two. I never realized how much of Lrudlrick’s traits rub off on me. Towards the end of the first day, Judy and I started calling each other our spouse’s name. 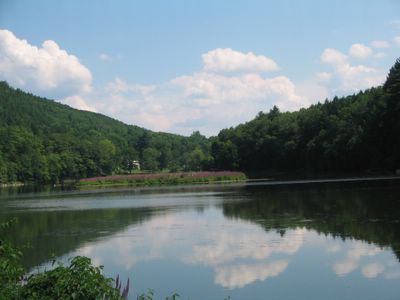 One of the many scenic views during the drive
Email ThisBlogThis!Share to TwitterShare to FacebookShare to Pinterest