I shower every day and no one gives me an ice cream cup.

I love my dogs but there is one thing I hate doing. It’s not picking up their poop and putting them in Ziploc baggies. It’s not waking up early to walk them. It’s not taking them out at midnight. I can even deal with cleaning up the occasionally puke. Of course the puke wouldn’t happen if Z would stop eating plastic.

It’s giving them a bath.

I hate giving my dogs a bath. Of course, my husband hates it more. Since we both abhor this task, we pamper our dogs and send them to a groomer for the full treatment. They get bathed. Their nails get trimmed and Z, my fluff ball of a dog, gets trimmed. BTW, why in God’s name would you do this to your dog? 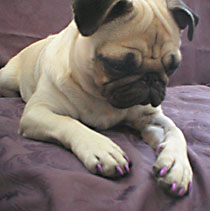 Twice Lrudlrick returned home with scented dogs. You know the kind of person that you can detect was in an elevator even without physical evidence? That was our dogs. Even P-man wasn’t keen on being all fruity smelling. He spent the next hour rolling on our carpet to rub the scent off of him. When that didn’t work, he kept rolling against our legs to share the Eau De Le Pew. Since then, Lrudlrick insists they don’t perfume our dogs.

There are occasions though where we don’t bring them to the groomers. In the summer, we frequent the park a lot more. Between the heat, humidity and dirt obtained at the park, we’d go broke taking them to the groomers every time we go romping. Then there is Z-girl’s hot spots. Z is part Chow, part Golden Retriever. She’s a fluff ball of hair. With this heat and humidity she develops heat spots on her belly. Frequent bathes with antihistamine shampoo are required in August for Z.

On Sunday, we had a particularly long walk in the park. I don’t know why we thought taking two dogs, both part Chow, out in the heat and humidity to the park was a wise idea. As we left the park and began our walk home, P-man, the eldest at 10, looked at me as if I was torturing him. At one point he looked at a cab longingly.
Lrudlrick and I finally made it home sweaty and tired and began the bartering. In the past it used to take two people to wash them but since they’ve gotten older, they have mellowed out. Still the task of bathing them is not in our list of fun things to do with your dog.

Thus, too tired to fight, I resigned myself to washing the dogs.

Z-girl is by far the most difficult to wash. She’s skittish so everything from a paper cup to running water freaks her out. However, yesterday she didn’t put up a fight. I’m not sure if it was the cooling effect of the water or the after effects of running them ragged at the park but she stayed in the tub during the entire bath. She didn’t shake like a leaf nor did she shake herself dry multiple times.

Usually, the bathroom looks like the interior of a car wash after Z gets bathed. But this time, there was minimal water damage. The bath rugs were even in good shape.

P-man was less than thrilled but realized that this is the price he pays every so often to live under our roof rent free. Tail down with the look of a broken dog, he stood there and allowed me to wash him. On my part, I washed as quickly as possible and tried to keep the water from getting into their eyes as much as possible.

For such bravery, I awarded them with Peanut Butter Ice Cream Cups (aka Nutlys).

Here are my tips for washing a dog in a tiny bathroom:

1. Strip down. Your clothes will get soaked. If you want to, wear a bathing suit.
2. Take all extra rolls of TP and guest towels out of the bathroom. I don’t care if it’s dangling from the ceiling. It’s going to get wet somehow.
3. Keep the toilet seat closed and use it as a shelf for treats and towels.
4. Keep a fluffy rug on the floor for your knees. They will thank you.
5. Remove your shower curtains or loop them onto themselves.
6. Use plenty of towels. I use two per dog. You’ll also need a towel for yourself because you’ll definitely need a shower afterwards. But keep it outside until you are finished.
7. Don’t try to play with your dog unless he likes the water. This includes trying to shape your dog’s hair into a mini Mohawk. He will not appreciate the humor.
8. Use a plastic bowl to pour fresh water onto your dog.
9. After they are semi-dried, take them outside and brush them. Most of the stray hairs will naturally shed off.
10. Have a stiff drink ready for your after bath treat.

Courtesy of UComics
Email ThisBlogThis!Share to TwitterShare to FacebookShare to Pinterest