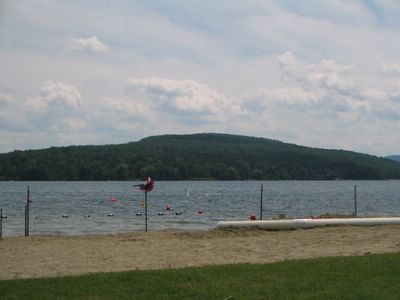 Nothing beats floating on a lake

Most of our time was spent at the lake taking in the scenery, the sun and the warm fresh waters of Stockbridge bowl. We took the most relaxing, beautiful kayaking excursion during sunset. Ben(aka Gentle Ben), our guide and all around free spirit, took us and 6 other ladies out into the lake to watch the sun set over the mountains. Living in the city, you sometimes forget the majesty and the brilliance of nature. Everything exists for a reason and being out in that warm lake water watching the sun change the color of the water from clear blue to twilight to gold to crimson to dark blue reminds you of that. My favorite part of the ride was letting the current move me to wherever it wanted me. I closed my eyes, let my hands sink into the warm waters and listened to the wind gentle howl around me.

Being a city girl, the odds of me tipping over were high, so I refrained from bringing my camera. Even if I did bring it though, a two dimensional photograph wouldn’t be able to describe the atmosphere and the tranquility of the moment.

The peacefulness was only broken twice. During a moment of meditation, the all boys camp across the river announced, “Gentlemen, in the game of life, you have now entered the twilight of your life. Lights out in ten minutes.” We all chuckled and I turned to Judy and told her I felt like I was Kristy McNichol in Little Darlings.

The second time the silence was broken was actually quite appropriate. Ben suggested we begin heading back to the shore. As we all kayaked our way back, the orchestra at Tanglewood began practicing Wagner’s Ride of the Valkyries. Being the loud mouth New Yorker, I burst into laughter and nearly tipped my kayak. All they needed to add was a Viking ship passing us and Brunhilde in her breast plate singing and I would have tipped over.
Email ThisBlogThis!Share to TwitterShare to FacebookShare to Pinterest