Fire up the pan.

Am I the only person that immediately wanted to run out and pick up a ton of ginger, scallions and soy sauce?

I even pictured digging a giant ditch and making some type of grill contraption to cook this thing. 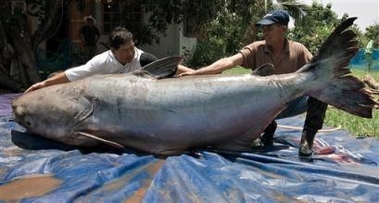 In this photo released by World Wildlife Fund-National Geographic, two Thai fishermen show a 293-kilogram (646-pound) giant catfish they caught from the Mekong River in Chiang Khong district of Chiang Rai province, northern Thailand Saturday, June 11, 2005. Thai fishermen have caught this giant catfish believed to be the world's heaviest living freshwater fish but died and was eaten after environmentalists and officials negotiated for its release to allow it to spawn. (AP Photo/Suthep Kritsanavarin, HO) -- Courtesy of Yahoo and AP
Email ThisBlogThis!Share to TwitterShare to FacebookShare to Pinterest