Resistance is futile... You will watch reality tv and you will like it.

Quick update for those interested in my “post it” in the bathroom issues. It’s gone! I went to the bathroom yesterday (No need for applause, folks) and it was gone. I kind of missed it but, eh. As I was washing my hands I had this sick thought that it would turn up again. This time it would be on a document I needed to sign. I’d recognize it by the dark stain on the corner. 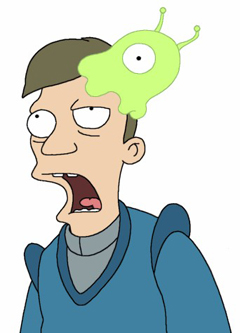 Yesterday as I watched J.Peterman try to Samba on live television, I saw a commercial for a reality show that I thought was a skit on Comedy Central. Apparently, 7 families will compete to win the affection of the neighborhood for a gigantic house. The house is located in a cul-de-sac.

The premise seems slightly sketchy but since I’ve been in NYC for my entire life, watched the gentrification of a predominately Irish/Italian neighborhood, been interviewed by 3 separate co-op boards and been on the board of 1, I can understand why this might be interesting.

Then they show the families. There are 7 families of multiple ethnicities.:

Oh ok. I get it. They’re trying to pull out stereotypes and possible biases. All reality shows needs some sort of tension. A little contrived but, hey. BTW, I’m surprised that they didn’t include a Muslim or a ‘secret society’ family.

Then they show the neighborhood families that will make the final decision. Have you ever watched Knots Landing? The cul-de-sac looks like it was taken straight from Knots Landing. The families too, except there isn’t a dark haired person in the bunch. At least on Knots Landing you had Michele Lee.

From the descriptions given the families representing the neighborhood include a staunch republican, a devout Christian (denomination not specified) and the so-called “governor” of the block.

"Great, hon. All they need now is to put this in Texas and we’ve got a real ‘firecracker’.” I said. No offense to any Texans out there. Texas is lovely. Visited once. Had friends go to school there. Just not what you call the melting pot of diversity as it is in NYC.

Sure enough, the families are vying for a 3,300 sq foot fully furnished house in Austin, Texas. For non-NYers, NYers will spend a quarter million dollars for a 400 square foot apartment and think we're Blake Carrington.

From the state census, the ethnic makeup of Austin as of 2000 is:

Now the problem I have most about this is the photos and images shown on the commercial had each family in “traditional” garb for their ethnicity. The Korean family had Hanboks on. The Hispanic family had ponchos on. The tattoo family had black on. I’m gathering that’s traditional.

Tell me the producers are not blatantly trying to call out differences. As if the fact that the two white guys strolling along with a black baby isn’t different enough in Austin, Texas, you’ve got to make them wear nearly matching outfits?

I feel it morally wrong to watch yet compelled to watch just to see what else the producers can throw out there. We all know a neighborhood potluck will be a theme in an episode. If the producers ask the black family to bring potato salad and chicken, I want to see a fight.

Side note: When I was a kid, I was the only Asian family in the neighborhood. Every year, during potluck (yes, we had potluck) they asked my mom to bring either fried rice or sweet and sour chicken. Once, my mother brought potato salad and they asked if the rice was in the car.
Email ThisBlogThis!Share to TwitterShare to FacebookShare to Pinterest