Star Wars, Part Deux. The Force is with Us.

Yesterday evening, I mentioned a peeve of mine. Well, I guess I wasn’t in the right frame of mind because last night was an ugly night. Lrudlrick made it home around 8ish. I suppose we were bouncing off of each other’s negative vibes (No, I’m not hippy dippy but you know what I mean) because we pretty much stayed out of each other’s way until dinner was served at 9:30.

Dinner consisted of Big Mac Salads. You make all the ingredients and skip the 1 and a half buns. I call it the ‘Two all beef patties, special sauce, lettuce, cheese, pickles, onions on a cold salad plate.” I know it doesn’t ring like the original but heck, my arteries are much happier and I still get that yummy ‘special sauce’ I hanker for every now and then. Get your mind out of the gutter. Sure the special sauce is essentially 1000 island dressing but if you really want to try to make it like McDonald’s here is the recipe courtesy of Stuff you can use:
1/4 cup KRAFT Miracle Whip
1/4 cup mayonnaise
2 Tablespoons, heaping, WISHBONE deluxe French salad dressing (the orange stuff)
1/2 Tablespoon HEINZ sweet relish
2 teaspoons, heaping, VLASIC dill pickle relish (Heinz dill relish also works)
1 teaspoon sugar
1 teaspoon dried, minced onion
1 teaspoon white vinegar
1 teaspoon ketchup
1/8 teaspoon salt

Mix everything very well in a small container. There better be no streaks! Microwave 25 seconds, and stir well again. Cover, and refrigerate at LEAST 1 hour before using.( to allow all of the flavors to "meld". ) Makes nearly 1 cup...enough for about 8 Big Macs™

Going back to last night, let’s just say because I harbored a bit of resentment I was a bit moody. Did I mention that the Dry Cleaners didn’t have his stuff ready? Yup, I stopped my errands to do his errands to find out his stuff wouldn’t be ready until tonight.

Anyway, we got into the car to go to Star Wars. Since we waited so long we couldn’t get tickets downtown and wound up driving up to Westchester County. We get there twenty minutes before showtime and as predicted all the seats were taken. They began shuttling us over to another theatre for the 12:20 showing when Lrudlrick popped his cork.

L: I didn’t want to come in the first place. It just seemed forced. No pun intended.
P: What? We’re always going to the midnight shows.
L: Yeah but I’ve had a horrible day and I told you I thought it wasn’t a good idea and that we’d suck up our losses and stay in.
P: You told me that I had an attitude and that we shouldn’t go until I got my attitude straightened out.
L: Yeah, and then you insisted and so we’re here now and I just want to go home.
P: Fine. Let’s just get our money back.
L: Good Luck.

We did get our money back, btw. Why do men just give up? Honestly, ask and you shall receive.

Anyway, it wasn’t until we were in the car when Lrudlrick went off on how horrible a day it was. That’s when it dawned on me. All the signs were there and I just didn’t see it. I couldn’t see it. I’m a female. When we have horrendous days, we talk until we’re blue in the face. We talk to neighbors, friends, spouses, parents, co-workers, mailmen and strangers on the subway. We just rant and rant and rant. BTW, this explains the influx of female bloggers in the blogsphere. I suppose misery does love company. We talk it out and then, it’s over. We feel better and that’s it.

Men just want the damn day to be done. There’s no need to rehash the day. It’s passed. Let’s just try to lay low until the day is over.

Lrudlrick was having a horrible day and he just wanted my help with the one thing he wanted to do, get his leather ‘Jack Bauer’ jacket back from the cleaners. It was the one thing that was his silver lining for the day. Instead of being a woman and saying, “Listen, I had a terrible day at work and I’d really like it if you could pick up the leather jacket,” he IM’d me, “Can you pick up the jacket?” and then promptly disappeared.

I suppose the whole night wouldn’t have been so terrible if we both weren’t in moods. I’m sure my hissy fit regarding my plans vs. his plans didn’t help. I did apologize to him and he apologized for ruining my plans.

So Star Wars was a bust for us but we’re scheduled again for tonight or tomorrow depending on how he feels after his hapkido class tonight. Personally, I’m a bit exhausted and it took every bit of my energy to get my butt in the car last night but if he wants to go, then a Starbucks run will be top priority. After all, Jedi mind control is a powerful force. 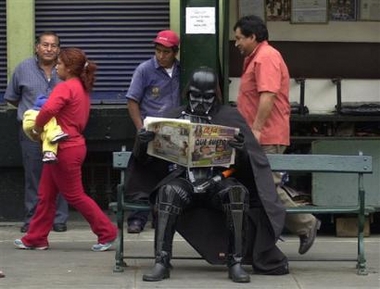 (AP Photo/Karel Navarro) Courtesy of Yahoo News.
Who knew Vadar was multi-lingual.
Email ThisBlogThis!Share to TwitterShare to FacebookShare to Pinterest