Happy Belated Mother’s Day to all mom’s out there. Yes, it’s a Hallmark holiday and yes, one day to celebrate all you do seems unbalanced but you are appreciated every day. Mother’s Day brought beautiful weather this year. I spent Mother’s Day searching for dog food and doing housework but it wasn’t as awful as it sounds. This actually turned out to be a very nice weekend, break-in and all.

First a recap of the weekend. On Friday, I took the day off and finally finished the diaper cake for my cousin. 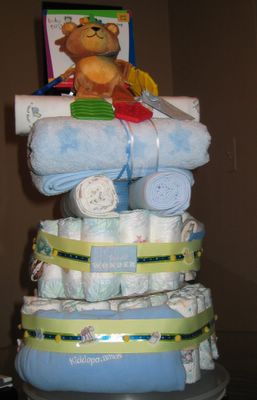 Here is the cake at 75% completion.

With my prep table cleared of all baby stuff, I was able to focus on my great cookie bake off. First, I had to finish another present, this time for a friend who just got married in France. Nothing big. I took some pictures from the wedding and put them in a silver frame with a decorated mat. Of course, I ran out of metal embellishments and needed to pick some up at the craft store.

Now, at this point, I should have gotten in the car, which I parked by the park instead of the garage, and picked up the much needed dog food and the embellishments. Of course, my lazy butt decided Saturday would be a fine day to do errands and instead started cleaning out my closet and sorting through stuff to donate.

BTW, I have 25 free hangers. 25! How did I get so many free hangers?
Saturday came. You ever have one of those mornings where you wake up and I wouldn’t say you’re walking on sunshine but everything seems to fit into place? That was my morning, at least for the first two hours. I shuffled my way into the kitchen and made myself some tea. The house was still quiet so I enjoyed my tea while flipping through the Times. I yawned and decided it was time to get dressed and do my errands. I headed outside, smiled at the warm sun and waved hello to my neighbor. I rounded the bend to my car, C4 and unlocked the doors. I opened the back seat door to plop in my shopping cart and found glass all over the interior. Someone broke into my beloved C4! At this point, I most point out that I my car talks. Not like Herbie with the beeps and the headlights flashing. My car has a female voice. As my brain slowly realized what happened, I swore my car said, “It’s about bloody time you showed up! Leaving me here for two days without checking in on me! Look what happened!”

My car was parked with next to two other Accords, but I must say C4 with her dark grey tinted windows was definitely the hottie of the three. I’d understand why she was the victim. The first thing I checked for was the airbag and the battery. Using my crime scene skills learned from many hours of CSI and Law and Order and their respective sisters, I surmised no one went passed the backseat. The glove compartment was untouched and everything else seemed to be where it was in the first place. 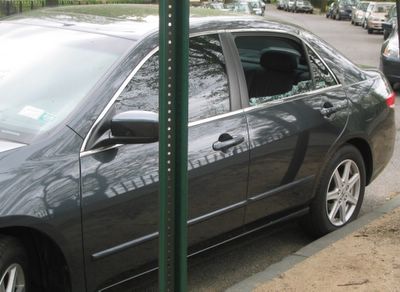 I called my husband who was getting ready to bike to the gym. “Did they take my glasses?”
pg: What?
Lrudlrick: Did they take my sunglasses?
pg: Well, I thought I made a thorough assessment but I hadn’t thought to check for your sunglasses.
Lrudlrick: Are the cds still there?

Obviously, our priorities are on different bands in the spectrum. For those interested, the sunglasses and cds were still there as well as the roll of quarters, EZ-Pass and registration.

With our plans shot, I called the vet to tell them to hold the dog food until Monday and waited for the cops. Lrudlrick spent the early afternoon calling the insurance company and arranging for the glass to be fixed.
The cops came and both officers kept telling me it was a shame it happened to such a smoking car. Ok, I said smoking but I knew they were thinking it.

After several arguments with Auto Glass dealers recommended by the insurance company, I let my fingers do the walking and found a place open until 5 in the city’s capital for auto parts, Hunts Point. You may have heard of it from HBO’s documentary Hookers at the Point. What they don’t mention is that every part a person needs for their car can be found here as well and at extremely discounted prices. I suppose the parts are from cars ‘idling’ during the wee of night. We go the glass fixed but they claimed we need another part for the window to roll down so we need to go back before our cousin’s Communion party on Saturday. At least we have a window.

Now, you would think that we’d be really angry and upset but throughout the whole event, we were quite calm and in fact extremely cooperative with one another. I don’t know if this was a stepping stone in our relationship or just two extremely lazy people who wanted excuses to avoid chores and the gym. I suppose my husband summed it up best, “We did worse as kids. Besides, it looks like someone just wanted a warm place to spend the rainy night in. At least the car is still here.”

True that. Once my car was towed and I nearly had a heart attack when I couldn’t find my car. Ok, twice.

If someone needed shelter from the rain Friday night, it’s a shame he/she had to break into my car to do so but at least he/she was nice enough to leave everything semi unscathed. Now, I just need to get the leather upholstery fixed and the switch installed.
Email ThisBlogThis!Share to TwitterShare to FacebookShare to Pinterest