"Come on-a my house, my house a come on"

pantrygirl:Yes, we were talking about how expensive day care is in the area. It’s like rent.
coworker:Yeah. Luckily, my wife and I have a nanny.

How is that lucky? We’re you inferring that luckily you are so well off, you can afford a nanny? Ok, I’ll give you the benefit of the doubt and say that you hired an illegal nanny which may be less of a stress on the wallet.
Hubby and I have decided that we’ll either join a daycare co-op or join a nanny circle.
Maybe that’s the problem. The reason we’re so reluctant to jump onto the baby bandwagon could be that we’ve researched too much. Maybe we should jump in with our eyes closed. It seems to work for some.
The baby train keeps rolling along. My cousin, Amy is due in June and I’m busy making her babycake for her shower. It’s her first. She’s the type of woman that doesn’t cut corners. She’s blunt as blunt can be. The first thing she said when I called her to congratulate her was, “Don’t believe the hype. Pregnancy sucks. I’m always uncomfortable.”
My ex-co-worker’s wife is due in June as well. Since a baby shower would probably send him to the loony bin, we decided to give him one last taste of man-dom; we’re taking him to a Yankees game. They’re having twin girls so his house will be overrun by Y-chromosomes shortly.
Personally, I guess mommyhood wouldn’t be as terrifying for me if there wasn’t so much flippin’ pressure. “Oh, you don’t want to wait until you’re too old.” “Shelf life decreases rapidly.” “You will have an increased chance of defects.” “I’ll have the Alzheimer’s by the time you two make up your mind.”
Now, a study finds that there is an increased risk of miscarriage if your male partner is over 35. Great. Thanks for the added pressure. I feel enough guilt and pressure to use my dairy ingredients before its shelf life expires. I really don’t need my eggs and his sperm stamped. BTW, NYC milk seems to have a shorter shelf life than suburban milk. Am I to assume this holds true for other things?
Well, my coworker, P.A., didn’t help my concerns. He talked about the first three months and how he’s been able to catch up on syndicated sitcoms because his daughter will not sleep through the night. He spends the hours between 10pm and 4am catching up on old episodes of That 70’s show while bouncing around the living room with his spawn. Great. Can you picture me with a cranky baby? Heck, I get cranky when I can’t open a jar of pickles. Lrudlrick will have to pacify a cranky newborn and a cranky postpartum woman. 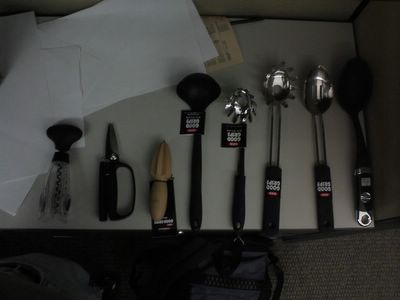 He went during his lunch hour to a sample sale. Man, nothing says loving like a pair of spaghetti servers.

Honey, tonight you get parfait!
Email ThisBlogThis!Share to TwitterShare to FacebookShare to Pinterest