And Now for Something Completely Disgusting

This morning, I saw a Gorg. I’m not joking. The Gorg was in front of me buying a cup of coffee. A photo of me and this giant would have produced chuckles. I don’t think his head would have fit into the frame. I think my head reached his thigh. For those who don’t know what a Gorg looks like, here is a picture. 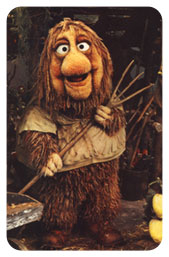 
Now I only wish I could find a picture of a Fraggle next to a Gorg to emphasis the height differential between 5'3" me and this giant beast. The Gorg walked into the building and had to crouch down to get past the door.

Anyway, this past weekend was absolutely lovely. We had planned to go to Hershey, PA for the special ‘flat fee’ admission but decided to stay in the city and just enjoy the spring weather. We took many a long walks with the pooches. Now, we both know that P-man is a stud. I don’t mean in the dog realm. P-man attracts humans like Brad Pitt attracts throngs of screaming women. I think it’s the curly question mark tail he has or it could be his stocky yet muscular build. In any case, he’s cute as hell and when he works his charm he looks like the Fox in Foxy lettuce.

Going back to my dog’s model looks, every old lady turned and stared at him. In every language, I made out, ‘cute dog’. Like a true supermodel, P-man just ignores the gawkers and continues his strut down the sidewalk. There is one thing that bugs me about P-man. I think he has ADHD. Can dogs have Attention Deficit Disorder? If not, I’d like to present my dog as proof that it is possible. He must have it bad too because he is so easily distracted that he could be in mid-poop and he’ll stop and stare at something that attracts his attention. He’ll do the circle-circle dance and begin the bearing down. Sorry for the graphics, guys. Then the wind will blow and he’ll look up and walk away.

Now, I’m not talking about the fake-out. I can smell a fake-out a mile away. Sorry for the bad pun. It had to be done. All dog owners know the fake-out. They pretend like they need to go but in actuality, they just want to walk further down the block and they know you don’t. You can tell a fake-out by how they keep looking back at you. It’s as if they pretend to pop a squat and then at the last minute walk away, you’ll feel guilty that they need to go and continue down to the corner just so they get a second chance.

At this point, I’m going to say that I’ve personalized my dogs way too much and I admit it. I’m sure my dogs aren’t intentionally faking it but when I’m running late and all they want to do is take a stroll, I feel mighty guilty cutting the walk short.

Going back to my dog’s ADHD. Once he loses his rhythm, it takes him two more blocks before he gets the urge again. This drives me insane. Maybe old age does that to a dog. He’s 9 years old. Personally, I don’t understand why they have to be so damn discriminating. The tree three blocks down and to the left is perfect but the tree across the street is off limits. It’s a damn fine tree. In fact it’s prettier than the other tree. I suppose in the dog’s eye, three block tree is the Cadillac of toilets and we live across from the Gas Station toilet.
Email ThisBlogThis!Share to TwitterShare to FacebookShare to Pinterest